A colleague at work brought Everett True cartoons to my attention - they appeared in newspapers and are now available online online in digitized papers. 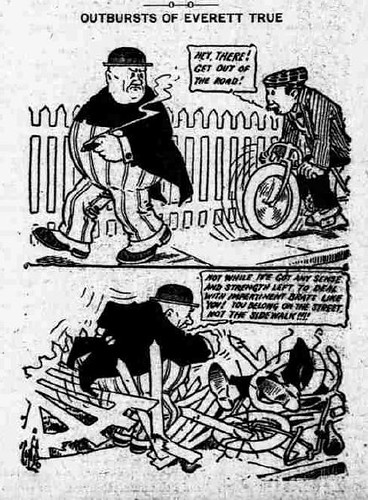 According to Wikipedia's article about The Outbursts of Everett True, this was a cartoon published from 1905 through 1927. The cartoon is described:

The original strip revolved around an ill-tempered man in late middle-age who was typically dressed in a suit and bowler hat of antiquated and comical appearance for the time. Without his hat he was completely bald. In the early cartoons he was moderately stout, but in the later ones he became increasingly portly. The first panel of each strip generally had someone inconveniencing or annoying True. In the second panel he would then make an ill-tempered outburst. In early cartoons this was usually an uninhibited rant which expressed what other people wanted to say, but were too polite to. Sometimes it was accompanied by comments from bystanders in speech-bubbles ("that's the way I like to hear a man talk"; "I wish I could hand out one like that"). Later cartoons were more slapstick in character. 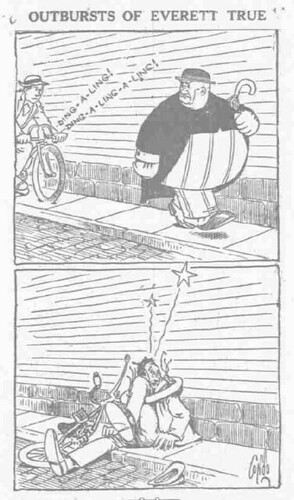 Cycling does not appear to have been a common topic; these are the only two examples I found and arguably they are the same cartoon, one with dialog and one without.

Anyway, in his "everyman" role, True seems to be expressing a general annoyance with cyclists on the sidewalk in cities - a hundred years ago. Who knows that the law was on this at that time (and in this place).

Posted by michael neubert at 7:58 PM