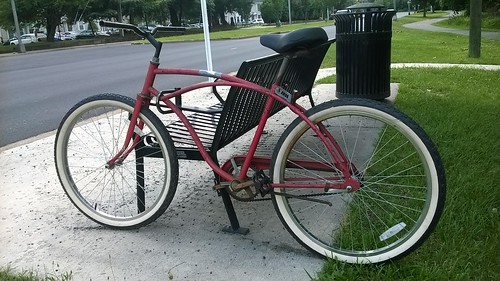 Bike locked to bench for about ten days 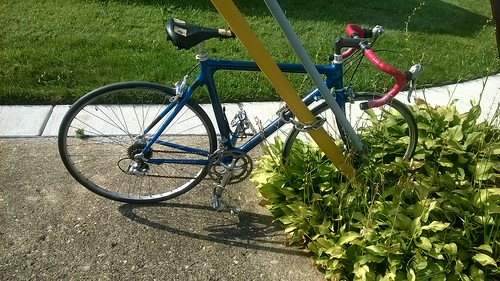 Bike locked to pole for about a week

I see these often along my commute - I sometimes imagine that the police lock these up as theft bait - that only seems a logical explanation because otherwise, why would bikes like these be locked up for so long? Just odd.

They are almost always oddly unattractive bikes - the first bike above is rideable - someone has updated an old cruiser bike as a fixie; the wheels and tires were reasonably new. The frame, however, was amazing for its rust - almost perfectly distributed across the entire thing. (This I would say however is not very attractive in a conventional sense.)

The second bike is even stranger. It's a Cannondale, discernible by the "handmade in the USA" on the chainstay. The components (brake levers, in particular) suggest it is almost twenty years old, but then it appears to carbon fiber? Or maybe it is aluminum. Someone has covered up the various branding. The funniest part is the chain used here, which looks like a chain you would use to lock up a motor scooter, not a bicycle.
Posted by michael neubert at 2:52 PM