The holiday themed advertising campaign is an American tradition - here is an example from a little over a hundred years for a July 4th bike sale:

The marketing approach in the ad's text is amusing (or something) suggesting immediately the second class nature of cyclists to motorists by this time (1913):


We are giving away an electric automobile horn to the best decorated automobile in the proce ion on July 4th, but thee are no prizes to bicycle riders. So I have concluded to donate to new riders handsome presents in the prices of new wheels. . . . We have a shipment of new, standard bicycles which will be on sale July 4th, while they last at twenty per cent off the regular price. This includes the regular $22, $25, $30 and $35 kind, from the single tube to Dunlop and G. & J. tires and coaster break [i.e., brake]. We have seven new bicycles to dispose of at these prices, and no more, and they will be sold for cash only.

With no connection to the previous other than that it was published in a digitized newspaper, here is an Uncle Sam graphic with him riding a bicycle to celebrate the Fourth of July: 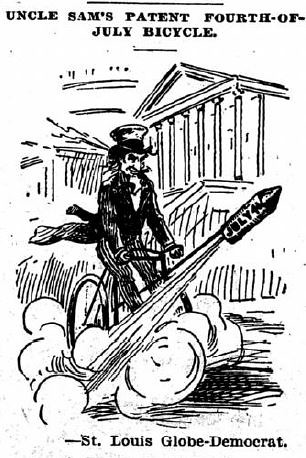 It would seem this was originally published in the St. Louis Chronicle but was republished in this Minnesota paper.
Posted by michael neubert at 12:33 PM