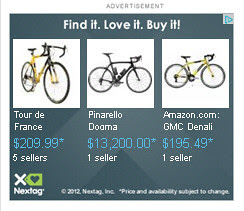 Recent ad on WashingtonPost.com providing a crazy assortment of bikes

I have burst out laughing when I have spent ten minutes gazing thoughtfully at some bike wheels on Amazon.com and then a while later, a sidebar ad on WashingtonPost.com tries to interest me in the very same bicycle wheels on Amazon.com. Well, uhm - I haven't changed my mind, as a matter of fact. Still don't want them.

This assortment, however, was quite amazing. What algorithm is behind this sort of thing?

A road bike called the "Tour de France" for . . . $209.99. Well, sure if you want a bike that allows you to answer the question, "do you have a bike" in the affirmative but don't plan to ride it. Because that's what a bike like this is intended for - not being ridden.

Then next up, a Pinarello Dogma - only $13,200!! What ?!? I don't pay attention to this market, so I can't say if this is a "good" price or not but that I'm not buying any bikes that cost more than the last new car I bought, I'm pretty sure of that.

Logically what should be in the third position here after the total crap bike and the bike that was hand carved by the most experienced Italian carbon-fiber-carvers would be the "just right" bike priced somewhere in the real world at around $800 - $1,200. But no, the algorithm goes completely off the rails and offers an even crappier bike. Regardless of price and anything else, there can be no worse a bike than one that is named after a car - and not just any car, but a monster SUVs, the GMC Denali. Who buys bikes with names like that? (I am not denying

I guess I should give them credit for somehow detecting my interest in road bikes over mountain bikes, but other than that this seems pretty clueless.

Don't get me wrong, monster SUVs have their time and place. But I have trouble seeing the connection between one of them and a road bike, in a good sense anyway. 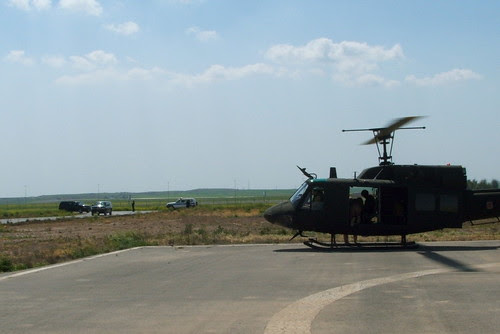 On a visit to Iraq some years ago, GMC Suburban vehicles made sense for my travel plans - otherwise not so much

Posted by michael neubert at 10:48 AM

Email ThisBlogThis!Share to TwitterShare to FacebookShare to Pinterest
Labels: advertising