A bicycle has been invented for traveling on ice or snow, says a New York paper. The long runner or skate, which replaces the front wheel of the bicycle, in itself is made for ice alone, but when the machine is used on snow-clad roads a metal shoe is fitted over the skate, and it is claimed that the machine will carry a rider over the ground, or rather snow or ice, at a greater speed than the regulation wheel. 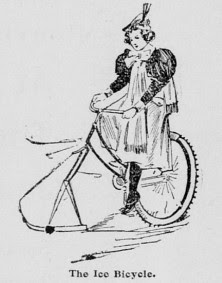 Miss Davidson, who is young and enthusiastic, mounted the ice wheel at a rink last evening with but little difficulty, and, after a few "wobbles," started off around the rink gracefully. The half dozen spectators were astonished at the perfect work ing of the machine. After two or three turns about the rink Miss Davidson did a few fancy moves and then dismounted.

Posted by michael neubert at 10:41 AM

Email ThisBlogThis!Share to TwitterShare to FacebookShare to Pinterest
Labels: 1896, women