OK Why DId I Believe Lance ?

I was surprised to see an extensive story in the NYTimes about people who had different things related to Livestrong tattooed onto themselves and what these people think about having done that given that Lance is a cheat (to use the shortest possible summary of his situation). Apparently the "Lance story" (or Lance stories) is not going away any time soon. (The folks with Livestrong tattoos state that the tattoos are about cancer survival, not Lance. By the way.) 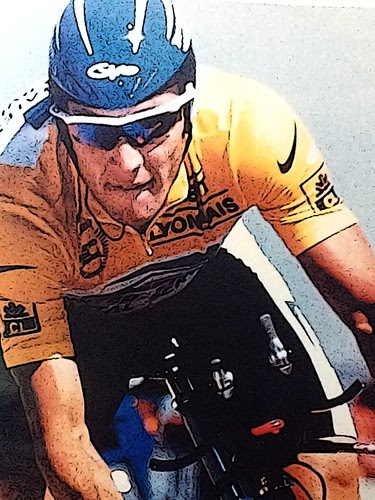 I started thinking about why back in the early 2000s, when I was paying some (although not that much) attention to Armstrong and the Tour de France annual victory that I believed he wasn't doping. Looking back today, this is what I remember thinking:

* It's a kind of cancer survivor justice - that a guy would come back from cancer and become the best cyclist in the world seemed cosmically right. This is just an emotional reaction, of course.

* After cancer, Lance was able to mold the "new Lance" perfectly for winning the Tour de France - I remember reading (probably in one of his books) that his pre-cancer physique was more suited to a triathlete than a general category stage race cyclist, but when he recovered from cancer he changed that. There is likely some truth to this but of course by itself it wouldn't make him better than anyone else for seven years.

* Huge VO2 max - I know I read more than once that Armstrong had unnaturally large oxygen capacity. Surely that's important? Of course since then I have read that it wasn't that much greater.

* High cadence - in addition to reading about his high oxygen capacity, one would see comments praising his unusually high cadence. More efficient, or something.

* American ingenuity - notwithstanding that his team sports director was Bruyneel (not American) I think I felt that Armstrong's success was a modern example of an American coming up with solutions that others had not seen in order to succeed. Armstrong talked about the importance of small advantages that cumulatively can mean success. Better equipment, better training, better diet - it all adds up to victory! Well, it sounds good.

* Focus on the Tour de France exclusively (or so it seemed) - of course Armstrong was in other races, but they were almost part of a training program for the Tour de France (in effect). He certainly didn't race as difficult a schedule as most riders - of course now it turns out (thanks to Tyler Hamilton for explaining this) that this was part of his blood bag management and otherwise to avoid too much exposure to doping tests. So it was part of his "focus on the TdF" strategy but not in the way I had hoped.

As I look back, the way conversations went, my summary feeling was that if you looked around for reasons (see above list, plus others I'm probably forgetting) it didn't seem impossible that Lance was clean. If anyone could do it, he could. That kind of thinking.

Eventually I became disillusioned because even though I thought it was possible that he was clean, it seemed like his team (Landis, Hamilton) wasn't and given Armstrong's personality it was hardly possible they were doping without his knowledge and even support and encouragement. So if Armstrong was winning with a team of dopers to support him (since bicycle stage racing is a team sport, really), that almost seemed worse than if he wasn't himself doping. To me, anyway.

And now when we read Hamilton, we see that the advantages from EPO and blood doping were far greater than a single percent improvement in performance that Lance talked about - he describes races where Bjarne Riis moved back and forth in the peleton as if on a motorcyle, effortlessly, clearly enjoying a PED-fueled advantage more like ten percent than one percent. This turns out to be the kind of gain in advantage Armstrong was seeking, not just a little bump from more aerodynamic helmets and the like. 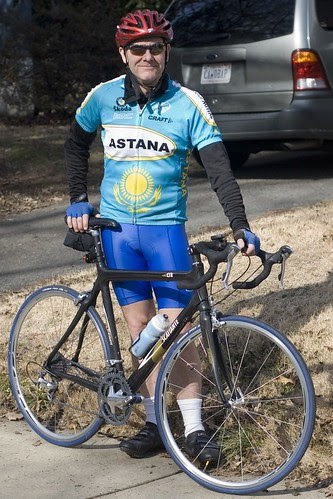 Wearing my Astana jersey that arrived in the mail the day before Vinokourov was busted in the 2006 Tour de France
Posted by michael neubert at 11:06 AM

Email ThisBlogThis!Share to TwitterShare to FacebookShare to Pinterest
Labels: racing