I browse bicycle-related items in the Library of Congress Prints & Photographs Online Catalog (PPOC) from time to time. Sometimes it is not that easy, given the descriptive metadata provided, to understand what or who some photographs are. 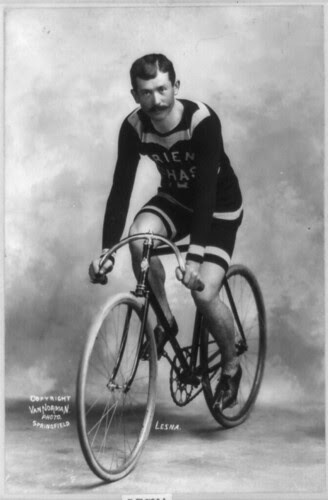 Identified in this Copyright deposit simply as "Lesna"

I happened upon this photo that came to the Library originally as a copyright deposit, presumably from the photographer's studio ("Van Norman Studio" that is applied to the photo). The only description that the Prints & Photographers had was his name, Lesna, which they did work out was his name.

Now before I move on to what else I learned about Mr. Lesna (and how I learned it), a comment about this image. In the record, it says: Reproduction Number : LC-USZ62-99752 (b&w film copy neg.) What this means is that this image was not produced from the original photograph that was deposited at the Library of Congress but that at some point (decades ago, most likely) someone paid to have a copy made of that photograph for which there is a "b&w film copy neg."[ative] and that negative was digitized. This is a reproduction of a copy, not the original.

Also, the only JPEG provided on the Library of Congress site is a not-terribly-good 37 kb version - if you look at it closely, there are haloing artifacts and general mushiness. This was done years ago when smaller JPEGs seemed like a good idea for speedy delivery. If you look at the JPEG I produced with IrfanView from the TIFF that is also available on the LC site, it also has some mushiness issues (likely reflecting the copy negative and not the original) but you can certainly make out more detail. The smaller version embedded in this page looks nicely sharp compared to the slightly larger (in height/width in pixels) 37 kb LC version. So . . . it may be worthwhile if you want to look at details to use the TIFF (or create your own derivative) and not rely on the LC JPEG. But with a digital reproduction of a photographic reproduction you are only going to get so much detail in any event.

Haloing in LC JPEG visible around writing and spokes

So, knowing only that this was someone named Lesna who was in one of many towns named Springfield in the U.S. around 1898, how did I learn more? Like any sensible person, I started with Wikipedia. Simply searching "Lesna" brings up various towns - "Lesna" means "spring" (the season) in several Slavic languages and apparently is used for a town name. Searching "lesna cyclist" locates articles about several French bicycle races from the right time period where someone named "Lucien Lesna" won, for example Bordeaux-Paris in 1901. Alas Lucien Lesna has no article in Wikipedia - or rather, in the English Wikipedia. But in the French version there is a short article listing some of his victories (but no biographic info). And it has the same photo from LC. (The person who put it into Wikicommons also decided the LC JPEG was crummy and he or she produced a JPEG about the same size as the one I ended up with. Ha.)

With this knowledge that Lesna was a French cyclist, how did he come to be photographed in one of the many Springfields? Presumably he was on a racing tour of America. And in fact, a search of Chronicling America brings up this page with this headline: "MORE RECORDS SMASHED Michael Defeats Lesna in the Great Twenty-Mile Race. The Frenchman Makes a Gallant Fight" that is datelined "Springfield, Mass." September 16, 1897. (So apparently the photographer only deposited at LC the following year.)


Fifteen thousand people howled Jimmie Michael, the Welsh wonder, around the track at the bicycle races this afternoon for twenty miles until he finished over an eighth of a mile ahead of his rival, Lucian Lesna, and established a world's record for sixteen miles and upwards. The contest was a beautiful exhibition of bicycle riding and Michael's superior pacing and fine head work contributed to his victory. 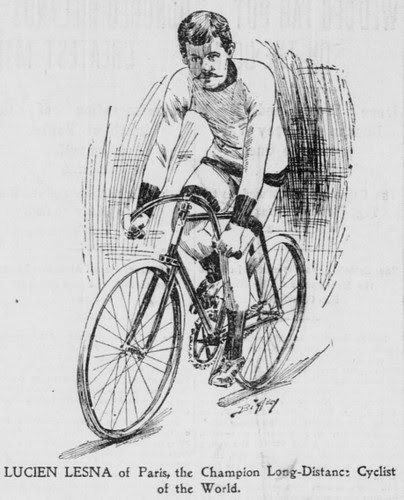 Illustration for article in San Francisco Call about Lesna

Another article in the The San Francisco Call from June 4, 1897 describes his arrival in America from Australia.


LUCIEN LESNA, CHAMPION CYCLER - He Is the Greatest Long Distance Rider in the World. Arrived Here Yesterday From a Successful Pilgrimage to Australia. Can Ride Twenty Miles at a Two Minute Gait,and Now Holds All Australian Records - Lucien Lesna, the champion cyclist of France and also the champion long-distance rider of the world, arrived here yesterday morning on the steamer Mariposa from Australia and is stopping at the Palace.

Thanks in part to Mr. Lesna's uncommon name and in part to the large amount of newspaper content digitized and searchable, it is possible to find out rather a lot!
Posted by michael neubert at 10:58 AM