Sarah Grand was a British feminist who traveled in the United States to lecture (and presumably sell more of her books). In an earlier post, I looked at an 1897 article about her suggestions for optimal cycling attire for women. (This article was published as filler material in a number of newspapers in the United States.)

I have since found a similar sort of filler item, but a shorter one from 1899, Sarah Grand and Her Bike, that uses a photo of Ms. Grand to demonstrate that she was not a "new woman" who practiced what she preached - she did not "ride in bloomers or trousers." 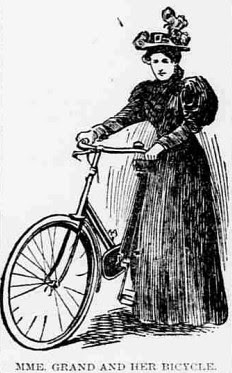 Illustration with article from the Kansas City Journal., June 04, 1899

SARAH GRAND AND HER BIKE
The Creator of the "New Woman" Does Not Hide in Bloomers or Trousers.
From the New York Journal

Sarah Grand, the author of "The Heavenly Twins" and the creator of the new woman in literature, rides a bicycle. We might expect her to ride in bloomers or trousers, or some other garment unlike any thing worn by the "old" woman, but instead of that we find her dressed in skirts of a decorous and graceful length.

Mme Sarah Grand has had herself photographed in bicycling costume just as she is about to mount her wheel. She has had this done because she wishes the public to know just what an ideal new woman looks like. You may see her on this page.

Sarah Grand is entitled by marriage to bear the good old Irish name of "McFall," but with curious taste she prefers the remarkably pretentious name of "Grand." Her husband was an army surgeon and she was separated from him. It is said that he was the original of the wicked colonel In "The Heavenly Twins," who was fond of long glasses of brandy and soda and of pretty girls, and for these sins was boycotted by his voting wife and brought to a sudden and terrible end by the author.

Sarah Grand is engaged regularly in literary work, but she achieved no success comparable to that of "The Heavenly Twins."

The full article as it appeared

A little research reveals that the photograph of Sarah Grand that was the basis for the newspaper illustration, claiming to show her as a "new woman" not wearing her suggested cycling attire was from 1896, before she made her declaration against using traditional women's clothing for cycling.
Posted by michael neubert at 11:27 AM