Sarah Grand was a British feminist and writer - somehow an article about her development of a more modern cycling costume for women riders came to be published in a newspaper in Los Angeles in 1897. Wikipedia notes that she had traveled in the U.S. to publicize her novel mentioned in the article. The byline for the article is given as London. 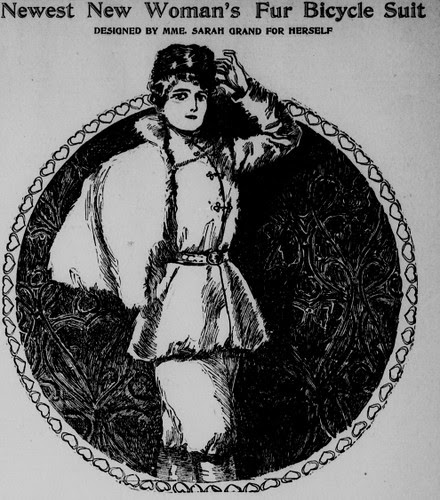 I have reproduced the highlights of the article, below.

By a judicious combination of ideas based on Shakespeare and common sense, Madame Sarah Grand, the world famous authoress of "The Heavenly Twins," has evolved a bicycle costume for women that is a startler. She calls her new bicycle dress for women her "Christmas bicycle costume,"and considers that in devising it she has given additional cause for rejoicing among women during the coming holiday season.

To begin to explain Madame Grand's costume, it is necessary to take the Rosalind of Act II, in "As You Like It," and, using her as a lay figure, to build the Madame Grand costume around her. Madame Grand is an enthusiastic admirer of Shakespeare, and the more she studied the free and easy grace of Rosalind of the russet doublet and hose, the more she became convinced that, had bicycles been in use during the Shakespearian era, the doublet and hose would have been the costume that level headed women would have adopted. . . .

So Madame Grand proceeded to think out her Rosalind bicycle costume, discarding one by one the nineteenth century articles of dress that fettered the sex when awheeling.

"No waist for me," said Madame Grand, at the beginning of her studies. "A waist on a bicycle is absurd. I can never bear to ride In anything tight, especially corsets, and I like to feel free and comfortable." And away went the corsets, and after them the waist, then the skirt and the bloomers, until Rosalind the lay figure was deprived of everything that pertained to modern costuming, and stood ready to be rehabilitated . . .

The costume is made for winter wear, although it can be fashioned readily enough into an attractive summer rig for the athletic girl. It is made of white fur . . .

"Nothing is unfeminine for a woman," she said, when asked about this point, "unless she chooses to make it so. I think we are beginning to show nowadays that we can do many things which used to be thought 'unfeminine,' and be womanly nevertheless. Bicycling Is one of them, and the wearing of a rational bicycle costume goes with it. The skirt is evidently not the thing. I have had two bad accidents from mine catching, and it was made by an excellent tailor. This is what led me to devote a good deal of thought to the subject, and made me come to the conclusion that an
easy and pretty costume might be modeled from Rosalind's dress."

One of several copies of a photo of Sarah Grand with a bicycle in 1896, but nominally under copyright of some sort.

Unfortunately I do not see any immediate possibility for access to Cycling World Illustrated, the magazine from which the image of Ms. Grand and her bicycle was apparently taken. The Online Bicycle Museum does have some pages of 1896 issues on line that are entertaining and particularly about women riders, but not complete issues.

Since I wrote this post, I discovered another later article about Sarah Grand and her cycling attire that I have a separate blog post about.

Posted by michael neubert at 10:23 AM