A Bicyclist Chased by Wolves
From the Alexandria [Virginia] Gazette, November 11, 1892. Newspapers apparently had to fill their pages and had access to general interest stories of this sort - this one appears to have been published in several papers across the U.S. around the same time. No illustration provided, alas.

Mr. Fred Whishaw gives in "Land and Water" an account of his being chased by wolves in the district of Pakoff. He had gone to Russia with a bicycle, and at the time he fell in with the wolves was on his machine, having covered a distance of some 12 miles in an endeavor to "head" some elk. I had (he says) ridden but a mile or two on the return journey when it struck me that I ought to alight and refresh my machine with a few drops of oil but hardly was I on foot than, happening to glance back along the road, I saw something which at first sight caused a thrill of pleasurable excitement, but soon gave place to very different sensations. Hardly a quarter of a mile behind, and coming toward me at the long gallop which covers the ground at a wonderfully rapid pace, were five large gray wolves. I saw the leader raise his nose, and, catching sight of me, cock his ears and give tongue, just as a dog might. There was no doubt about the fact. I was being hunted. I was speedily up and away, and as I caused the pedals to whirl in a manner to which they were entirely unused, I tried to calculate coolly the probable relative swiftness of bicycles and wolves. I had at least ten miles to go before I should reach safety. I might possibly do that in three-quarters of an hour, if the machine and my breath held out. Could the wolves accomplish the distance in less time? The situation was by no means one for trifling. When I had ridden a couple of miles or so I ventured to glance back, the result being the instantaneous conviction that the wolves had gained upon me. They had gained a hundred yards at least. At this rate I quickly calculated that they would pull me down just about two miles before I could reach my destination and city of refuge, Lavrik; unless, indeed, they could not keep up the pace, which i flattered myself was rather hot.

Another two miles and another peep behind me. The wolves were barely two hundred yards away now, and coming along as though they enjoyed it. I could swear that the leading wolf licked his lips as he saw me look around. I tried a spurt. The road was as level as a billiard table, and I strained every nerve to the utmost, but even as I did so it was borne in upon me that spurting would not do. I must slacken off at once, for I could never keep up the terrific rate at which I was now traveling. In fact, I must economize all my staying powers in order to last out the distance at even my former rate of progression. Then suddenly an idea occurred to me. I would ring my bell loudly and continuously, and see what effect this would produce. I pressed the gong, and turned to observe whether the sound would check my pursuers. The effect was instantaneous. No sooner did the first clang of the gong ring out than the wolves, every one of them, stopped dead and disappeared behind the trees. I gave a yell of defiance and delight, and dashed on, ringing away for dear life. But my triumph was short-lived. Oh looking back a few moments after I found that my foes were again in full pursuit. However, I had gained a little.

On we flew, my gong sounding harsh and strident in the silence of the forest. It was magnificent; at least it would have been if it had not been so horribly dangerous. There was a rut trodden by horses running all along the very middle of the road. I avoided this and rode at the side, which was smooth, for the runners of the light sledges do not as a rule wear the snow. It was easy enough, of course, to avoid the rut when riding straight ahead; but while looking round there was the danger of my front wheel slipping into it. and either checking the way of the machine or even causing a capsize. I had just turned my head to look round upon my pursuers for the twentieth lime - alas! they were still gaining, and were now within fifty yards. Hearing a loud clatter in front of me, I turned back again to see what new danger threatened me from that direction. In thus twisting back and round again I allowed my front wheel to go out of the direct line. The next instant I was in the rut, and. before I had time to see what was happening, was, with my trusty bicycle, buried a couple of feet in the snow at the side of the road. I gave myself up for lost. All this did not take long to happen, and as I emerged from the snow I was in time to see two things. The first object that met my gaze was a magnificent bull elk, followed by four smaller ones, just in the act of trotting across the road, not ten yards from me, striding through the snow at a long trot, their heads well raised and resting back on their shoulders. The other object was the little pack of wolves. Scarcely fifty yards behind me when I upset, these were upon me in a moment, and I had barely time to seize the heavy spanner of my machine and put my back to a tree when, to my delight, the wolves - then but five yards from me - pricked up their ears, passed me like a flash of greased lightning, and darted away in pursuit of the elk. I picked up my bicycle, and. to put it mildly, rode away with all speed. I think I rode those three miles in "record time," anyhow, I was fifteen minutes less than two hours from the start when I scudded into Lavrik, and if I had not ridden twenty-eight miles I must have done very near it.

Frederick Whishaw wrote a book about his travels in Russia, "Out of doors in Tsarland; a record of the seeings and doings in Russia" in 1893 but it does not include this story or anything about travels with a bicycle. The above tale seems to have come from a journal, Land and Water, published in England by the "Country Gentlemen Publishing Company" and does not seem to have been digitized. Yet. 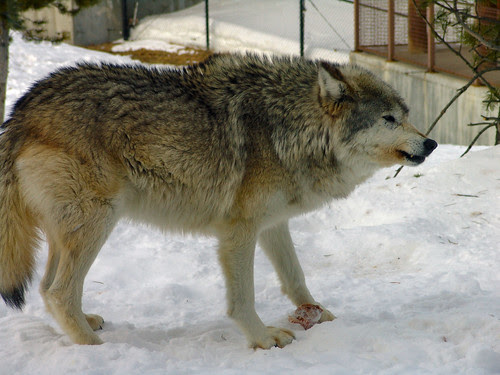 Wolf from Flickr
Posted by michael neubert at 5:01 PM