Riding to work, I saw these bikes by the tidal basin, not far from the Jefferson Memorial. Three days in a row! (Going home, navigating the intersection there, I kept forgetting to look to see if they were still there in the afternoon.) Today I looked up the vendor, Capital City Bike Tours online and sent them an email. 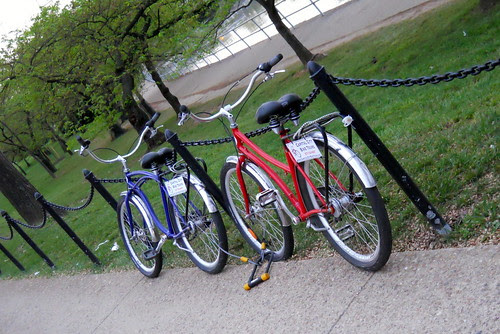 After more than 48 hours locked here, still both in one piece

Thanks for the email and the heads up. I appreciate you letting us know about this. As it turns out, some guests who rented them decided to not bring them back. Anyway, we took care of it and picked them up today.

Thanks again and have a great day!


So, they were then rescued. Even if they are slightly beach cruiser-ish rental bikes, better they should return to service in one piece.

I was reminded of the photo book, Bicycles Locked to Poles This is a most peculiar book of photographs of books, mostly partially or completely vandalized, locked to poles in New York City. 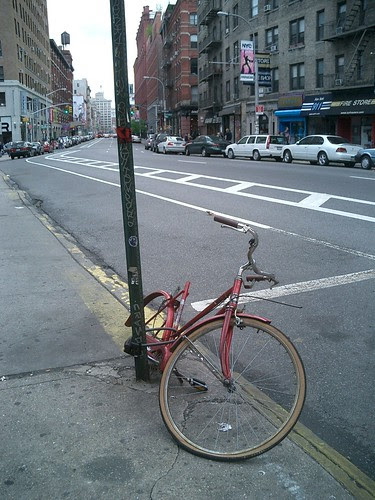 This isn't from the book, but is the sort of thing that is

Of course bicycle theft has been a problem since . . . there were bicycles to steal. The Washington Times had an article, for example, in December 1899 that reported on this issue:

THE THEFTS OF BICYCLES
How the Thieves Secure Possession of Valuable Wheels.
The methods of regularly organized gangs of robbers exposed by the police - Machines, shipped out of the city others rebuilt - One good effect of the cold weather.

According to the reports at Police Headquarters the bicycle thieves who have been carrying on extensive operations for months past and particularly during the warm weather period, have to a very great extent ceased their operations. As a result tho complaints of bicycle thefts which until recently have been numerous are now reduced almost to a minimum, and the prospects are that as long as the cold weather continues the present condition of affairs will exist.

The diminution in the number of complaints, or rather the fact that a decrease in the number of thefts is apparent. Is attributable, say the police, directly to the weather conditions. The police claim that cold weather is in more than one way responsible for the scarcity of bicycle thefts.

Detective Muller, of headquarters, whose especial duty it ist to look out for and recover lost or stolen bicycles, and arrest all such thieves, stated yesterday that the most annoying thief which the police had to deal with was the sneak who made a business of stealing bicycles.

According to Muller no one can tell where the bicycle thief is going to turn up. He will steal a bicycle in one portion of the city in the morning, and before the sun sets will have made off with one and sometimes more from other sections. Almost invariably the thief leaves no clew [sic] and is only captured when, after weeks and sometimes months, he gains enough temerity to offer his ill gotten gain for sale.

Even then it is often the case that the original stolen bicycle is so disfigured that it is almost an impossibility to identify it. The recent arrest and conviction of a regularly organized gang of bicycle thieves and the recovery from them of a number of bicycles exemplified the difficulty met by the detectives in establishing the ownership of such recovered property. . . . .

The article continues further with more details of bicycle theft in DC at the turn of the last century. I like the idea that cold weather is good since people keep their bikes indoors, don't use them, and therefore they aren't stolen so much. 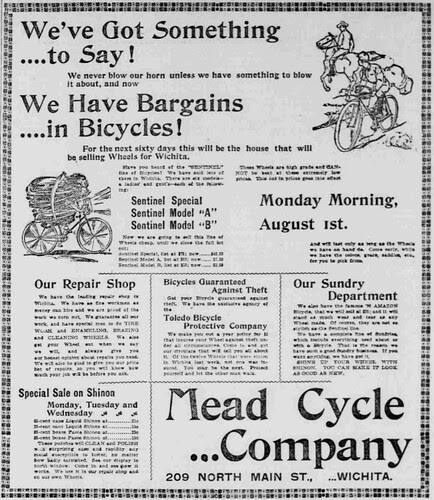 Bicycle Protective Company? Well, we don't have that today.
Posted by michael neubert at 7:16 PM