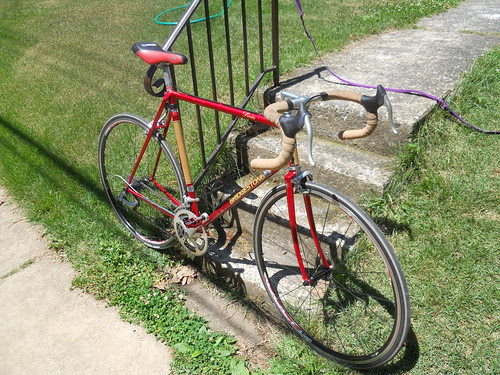 When I acquired this Bridgestone frame and fork and started riding it, about a year ago, it still had the original bottom bracket installed. The spindle spun nicely and since it was a cartridge type (not loose bearings) I didn't attempt to lubricate it. Probably that was a mistake. 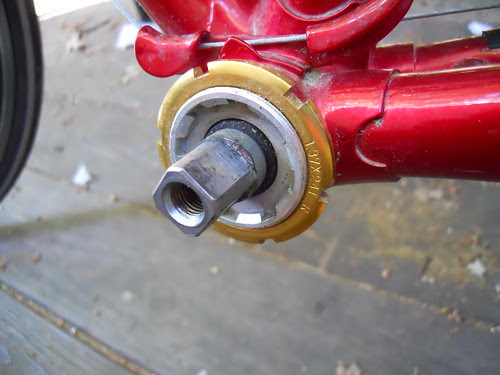 After probably 1,000 miles or so, the spindle suddenly became quite crunchy in its travel. However I was not able to get the bottom bracket out of the bike, even after I bought what I thought was the necessary tool. I took it to my local bike shop and they couldn't get it out, either - the mechanic recommended I try using a torch to heat up the bracket and (hopefully) get it loose. This might well wreck the paint, which seemed too bad, so I put the bike aside for a while to think it over.

Eventually I got the torch and the bike together. Apparently the bike thought better of its attitude once it saw the torch, because when I gave one last try to get the bracket to break free, it came loose immediately. After that, it was back to the local bike store to let them replace the bottom bracket with a new one. I could have done it myself, but they have been pretty helpful lately and not charged me anything, so about time to let them actually do something (AND charge me for it). 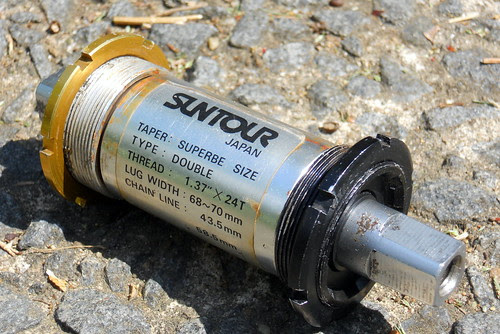