Dr. Neesen's Book on Wheeling published in 1899 has this guidance:

In learning to mount, head your wheel for the down grade, place your left foot on the little projection on the rear axle, shove off with the right foot, raise up on your left foot, and balance that way until the right pedal rises to its height, then place the right foot on it, glide into the saddle and seek the left pedal with the left foot. Experts are in the habit of mounting directly from the pedal as a horse is mounted. This requires considerable skill. Dismounting, however, is done from the pedal. Just as the pedal reaches it lowest level, and is about to rise, stand up on it and fling the other leg over the saddle. Mounting from the pedal is done in the same manner.

Of course, this mounting from a peg on the left of the rear wheel is quite different than what is generally done today. One may wonder why they felt that "considerable skill" was required to mount the bicycle as we typically do today, and the answer would be that this is a fixed gear arrangement so that whenever the bike moves, the pedals spin - there is no coasting possible - and this would make getting on a moving bike with the left foot on the left (spinning) pedal more difficult, assuming you try to get moving and get on at the same time (which apparently was the thinking).

I noticed an image at work that needed to have its "title construct" (a made-up title that describes what the cataloger sees in the image) updated. 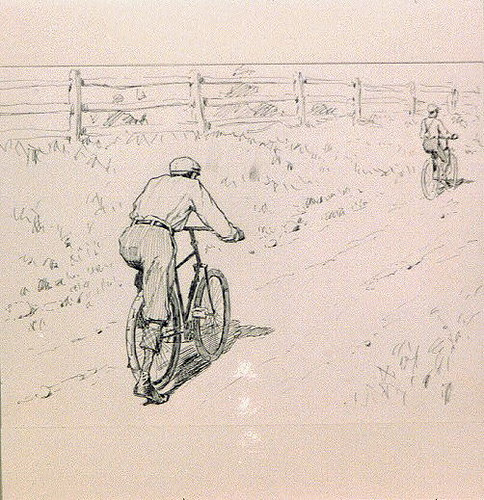 In fact, this is a man getting on his bicycle, perhaps to give chase to the other cyclist. You can tell by where the left pedal would be compared to the right and where his left foot must be - he has his foot on the "peg" and is getting ready to swing himself up onto the seat.

Following my advice, the title was changed to this: "Man in foreground mounting bicycle to follow bicycling man in distance."

Posted by michael neubert at 1:06 PM