Learning to Live with the e-Bikes

Until recently, I almost never saw e-Bikes - there is one fellow near where I live who rides along much of the same route I take who, depending on our respective schedules, I would see often enough, but that was pretty much it.

Suddenly I am seeing them a whole lot more - I assume this is a result of higher gasoline prices combined with increasing options for the e-Bikes available. I am having trouble getting used to them, which is not very tolerant of me, I guess. 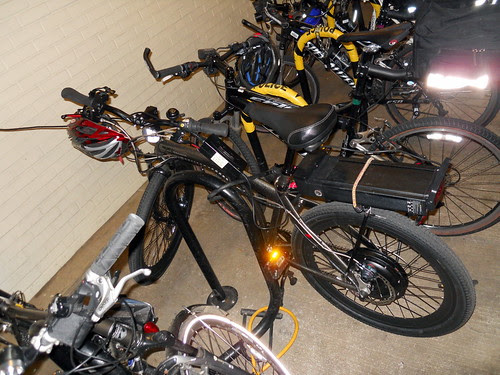 An e-Bike, parked on the bike rack where I work

Wikipedia has a reasonably good article describing e-Bikes, although some of the conclusions aren't terribly current, based on 2010 information. The kind of e-Bikes I am seeing are various types of "hybrids" that combine pedal power and electric battery driven power - I think most of these require pedaling in order for the electric drive to engage, but it isn't obvious when looking at them whether this is true. By federal law, they are supposed to be limited to 20 mph with electric power alone and 750 watts.

The above e-bike, which has been parked recently at work, is a http://prodecotech.com/bikes/storm-500/">Prodeco 'Storm-500' model (the 500 is for 500 watts). It has the most common configuration I am seeing, with the drive in the rear hub - I believe that the the drive system (in the hub) is made by a separate company, because I see this same sort of hub on different companies' products. The main utility of this is that it means the chain doesn't have to carry the power of the motor's propulsion, just the (much lower wattage) energy of the rider, so presumably no special chain is required and all the parts of the bike associated with the chain are the same as a regular bike. (Another way of achieving this result is to put the drive in the front hub.)

The information on the Prodeco web site is a little vague. It does not appear one has to pedal to engage the motor, since it has a "Press the Throttle for ‘Power-On-Demand’ propulsion system." I assume the frame is still, but perhaps it is aluminium - they don't say. The "group" is reasonable, although I'm not sure I agree entirely with the later part of Prodeco's statement that it has, "High quality components (as with all Prodeco, we use only the highest quality components)." In some of their choices, they could have made more costly choices that would have represented higher quality, I think. The most obvious place to offer something better would be the cable actuated disk brakes, where hydraulic would seem a better (but more pricey) choice. But if one accepts that the cable brakes are OK, then what they have is "the highest quality" (since there isn't that much difference between the choices, as far as I know). The rotors are nice and big, which should help.

The Prodeco site also leaves the bicycle weight out of their "product details" - but lifting the Storm-500 up at the bike rack, it's clearly over 50 pounds. (I did find a review of the 200 watt Storm model saying it weighed 46 pounds, so "over 50" seems about right comparing features etc.) One of Prodeco's priorities is to keep the weight of the bike down compared to other companies' products, but without the electric propulsion, riding this bike would be a real chore at this weight. So I'm not sure I'm very impressed with its "low weight." For $1,299 however, it seems like a pretty good deal, all things considered.

It still takes some getting used to, having folks who don't exactly look like Speed Racer zipping along on the trails with these things - again, I need to work on my tolerance. I remind myself that they are more like cyclists than motorists, and therefore presumably our ally - but I'm not all that sure. I read in Wikipedia that one in eight bicycles sold now in the Netherlands are e-Bikes, so we likely have many more such bikes on the roads and trails in our future.

By the way, electric bicycles were attempted very early after the introduction of the diamond frame "safety" bicycle - here is a short item from the 1892 "Pittsburg Dispatch" (yes, spelled without an "h" at the end of Pittsburgh).

One Devised in England for Which Great Things Are Claimed.

THE LATEST ABOUT THE SUBTLE FLUID

The electrical bicycle is again cropping up. This time it is in England, and its inventor promises to give the public a machine that can go from the most northerly to the southern extremity of Great Britain without stopping to have its batteries refilled. The weight of the batteries when filled with liquid is to be 44 pounds, and the whole weight of the apparatus is to be 155 pounds. The English financial papers also announce that a small company is to be brought out with a capital of $15,000 for the manufacture of electric cycles. Until, however, the practicability of the electric cycle is demonstrated beyond question, the public may be pardoned some degree of incredulity concerning it. The electrical tricycle, which was designed by a well-known electrician in this country some two years ago, failed to reach the practical stage, and although the storage battery is turned to better account in England than here, the record of English electrical bicvcles is not by any means satisfactory. Whether this latest form of bicycle will be an improvement on its predecessors remains to be proved.

By "subtle fluid" they mean electricity. Of course, electric, steam, and gas-powered two wheel and three wheel vehicles evolved into cars. Round and round the cycle goes. So to speak.
Posted by michael neubert at 7:35 AM