When to Put on New Tires?? 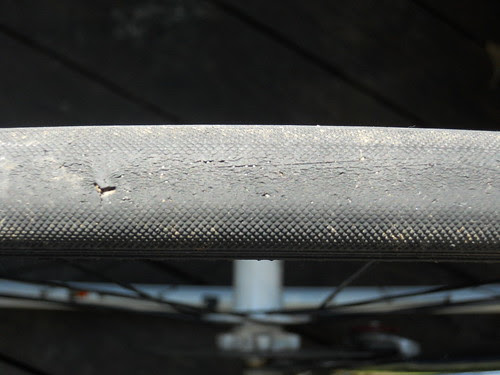 These tires came with my "urban/cyclocross/whatever" class Traitor Ruben bike, purchased a little over two years ago. Maxxis puts the Re-Fuse in its "road-training" category with an emphasis on "traction, durability and plenty of road miles in any condition." The main emphasis seems to be on anti-flat protection - a "Kevlar® belt and silkworm cap ply combine to provide a tire that Re-Fuses to puncture." (Maxxis, a company in Taiwan, learned their English from the British.) I think the idea is to compete with better known tires like the Continental Ultra Gatorskin and the like.

I ride this particular bike in crummy wet weather and when it is cold enough that it seems simpler to use a bike with panniers to carry all my stuff than a messenger bag. I have a cyclocomputer on it but I don't know where the instructions are, so other than the current speed display, it doesn't provide useful information (like how many miles traveled). Oops! My impression is that I have riden it somewhere between 3,000 and 4,000 miles, which is also how far these tires have gone. (I "rotated" them once, putting the front tire on the back and the back tire on the front, since the rear tire wears faster.)

I chose to photograph (above) a section of the tire that is mostly typically, other than that three-pointed ding that looks like something is stuck in it (but other than grit, there isn't). When that first appeared, I took the tire off to see that it didn't go all the way through and otherwise investigate just how far in it went - I eventually decided it looked worse than it was and to see how things went with it. I have no idea what caused it - if it was something sharp, why didn't it hole the tire? Anyway, I think I rode another 1,000 miles after it appeared.

The generally crappy appearance of the tire surface only got this bad recently. Originally the tire had a nice "bumpy" appearance on the entire riding surface, but that smoothed out on the center portion fairly quickly, but this worn appearance with small open ridges into the rubber took a while to develop - as one can see, this gathers grit into the tire surface, but since it is all pretty small stuff, there doesn't seem to be much point in trying to pick it all out. Still, not a good sign.

Anyway, since it is fall and I am going to be riding this thing more, I decided it was time to change to a new set of tires because it seemed likely I would start having problems with these this winter. I try not to spend too much money on tires, so I wait for sales from online vendors like Bike Tires Direct and at some point long before I needed new tires I was able to buy a pair for $65, which seemed pretty good for a folding road tire. (A folding tire has a Kevlar bead rather than pieces of wire - trying to mount a tire with a wire bead at home is bad enough but if I have a flat on the road it's hopeless, so I only buy folding road tires, but of course they cost more.) If I had waited to buy the tires until I needed them (ie, when they look like they do now) I might have considered switching to some other tire, but given the kind of riding I have done and the cost (and since I already own them!), I guess I'm satisfied with putting on another pair of these.

I believe people like Jan Heine write about waiting until they get several flats that they attribute to tire wear before putting on new tires, but I don't want to manage them that way. Perhaps it is using road bike (23-25 mm wide) tires - often something besides overall wear of the tire surface causes some problem that necessitates changing to a new tire. Looking at this Maxxis tire, which hasn't flatted in some time, I'm not really thinking it is worth seeing how much more wear it can take before I spend large parts of my commute on the side of the trail (in winter . . . ). 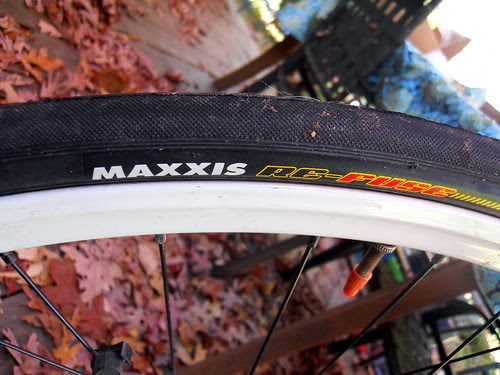 So here are a couple of shots of the same tires when new. The bumpy pattern is a little surprising for a tire classed as a road tire, but there it is. I take the Sheldon Brown point of view on tires that for road use, a smooth tire is ideal and that a tread pattern (particularly one this minimalistic) contributes nothing for traction - on the other hand, it is so minimal that I don't think it slows the ride down, either (and anyway, the bumps wear flat on the center line pretty quickly). 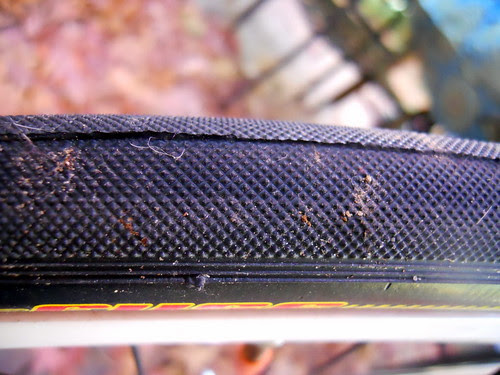 The assumption that some tread pattern was better than smooth for traction was a selling point for one tire in the 1890s - the "VIM" tires. If only the woman in the ad below had her bike fitted with VIM tires with their "pebble" pattern, she would not have crashed. 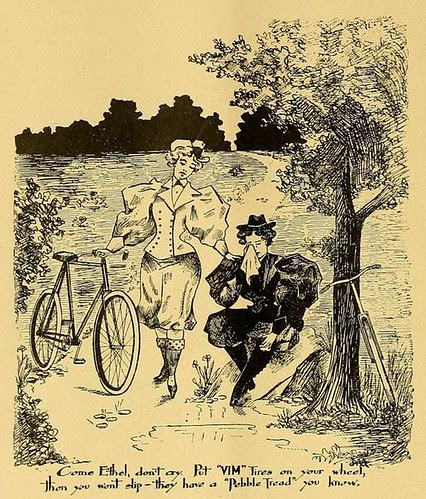 The pattern for the VIM tire is quite like the Maxxis Re-Fuse. Perhaps while riding on dirt roads and the like then (and of course this tire would have been much wider) it was helpful.

Ad shows the tire pattern (rather than no pattern at all)
Posted by michael neubert at 12:16 PM