1890s Bike Patents, Sensible and Not So

I have posted about drive systems other than chains before - even though the typical bicycle's chain drive approach was the development that made the "diamond [frame-shaped] safety" bike possible in the 1880s and is amazingly efficient, inventors then and after keep trying to come up with better alternatives. 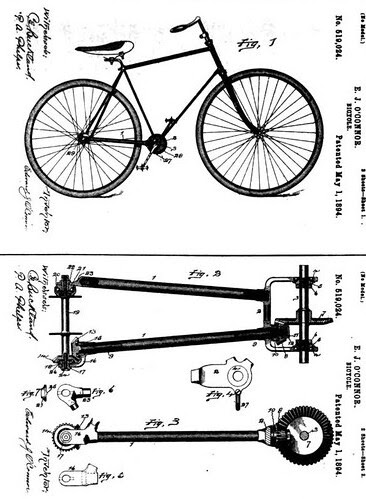 Shaft drive patent in 1894 for a "chainless safety bicycle"

This was not the first patent for a shaft drive system for a safety bike. The typical (and easier) shaft drive approach is to have two regular chainstays and to replace the chain drive with the shaft drive - here the right chainstay is also replaced by the shaft drive, so that the shaft drive replaces to different parts of the bicycle, both its drive system and part of its frame. I suppose it seems more elegant to have a single straight piece of metal rather than two in that space.

Some manufacturers still are trying to come with shaft drive bikes that will sell, but I don't expect them to become common any time soon - as the Wikipedia entry notes, a properly lubricated chain is more efficient.

So while the 1894 patent was not a recipe for success, it was an idea that had a tenacious appeal (apparently, judging by its refusal to go away). The Columbia Bicycle folks tried to sell shaft drive bikes during the 1890s-1900s but they were always the most expensive option and never caught on.
Columbia and Hartford Catalog, 1900

Other patented ideas, however, were just goofy ~ 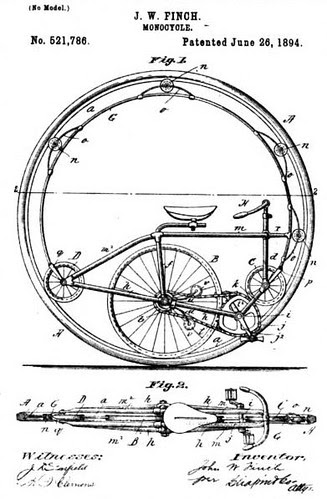 The advantage of this patented idea was what, exactly?

I am quite surprised to read there was a whole "class of velocipedes" using a "continuous circular track" that the bike operates within, as stated in the patent application's text (see below) - I guess if I looked at more old bike patents I would probably find them.

The object of this invention is to improve the construction of that class of velocipedes embodying a continuous circular track or rim in which is mounted a wheeled frame for the rider, and which is pedal driven by the rider. The improvements relate to the construction of the inner machine with reference to its engagement within, and guidance by, the great wheel or endless track.

How do you steer? I confess in the end to be more intrigued by the triangularly shaped chain ring - how does that improve things? There was the famous Shimano "Biopace" chain ring that was oval, but triangular?? Hmm . . .
Posted by michael neubert at 9:23 AM