Alas, Daylight Savings Time is over, and it is the season for commuting home in darkness. While there are certain entertaining challenges to this, mostly I find myself having to resist being super annoyed with an ever-increasing number of fellow bike riders.

My approach is perfect, of course. Well, not really, but I think it is OK.

Part one is a good headlight that doesn't blink. I bought a NiteRider Sol 115 lumen headlight three years ago (almost exactly) for $99. In areas where it is truly dark on moonless, cloudless nights (the clouds can reflect a lot of city light back down, it seems) you can see the details of the trail reasonably well. On the other hand, it isn't so bright that it blinds oncoming cyclists.

Part two is to have a couple of those blinking red things on the back. At the moment I have only one because although I bought three; two are broken. The idea was to have the same bracket on several bikes so I could move them from bike to bike easily, but I wasn't expecting them to fail quite so readily. I do not recommend the "ViewPoint Flashback 5 LED Mini Tail Light" - the circuit boards are too fragile. 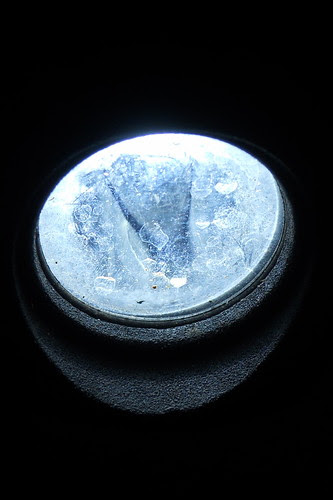 The NiteRider "Sol" 115 lumen + headlight I use

The "the more the better" approach is getting more popular all the time, thanks I suppose to the falling price of good (as in bright) lighting. For the same $99 you can buy 250 lumens worth of NiteRider bike light at Performance. (For only another 50, you can have 600!) While I have no doubt it is wonderful to light up the trail ahead with all that light, most cyclists are pretty poor at aiming their lights so as to avoid blinding oncoming riders and I don't think the manufacturors have spent enough time focusing the light output particularly well, either.

The "headlight on head" approach is also more popular since you can now bolt 250 lumens to your helmet with a self-contained battery (no cord to a battery in your back pocket etc.). This generally is worse for the oncoming cyclists than 250 lumens bolted to a handlebar. The headlight on helmet makes a lot of sense for bombing through forests at night on a mountain bike, but that isn't what we are talking about here.

The blinky light approach has evolved to include the super-bright blinky option. 100s of lumens, flashing! Right in your face! Well, obviously I find this annoying. Am I the only one? Anyway, I don't see how this would "scale" - let's say instead of the relatively small number of people riding home in the dark on bikes we have now that we had four times as many. It would be miserable if half of them had these lights. It's bad enough now as far as I'm concerned.

The retrograde approach of little or no light has yet to disappear - perhaps they are protesting the people with too much light by having none at all? I don't know, but they're still out there, sometimes in pretty dark circumstances.

A couple of nights ago I was entertained by a fellow who was in this last group meeting up with someone in the "power light on head" category in front of me on the trail. The underpowered fellow had an anemic headlight using a CVS brand C battery or two purchased several years ago, I would guess - completely useless for seeing the way ahead (and not much for "being seen" either). He was charging along in the dark going south under the many bridges on the GW Parkway (Mount Vernon) trail near the 14th Street bridge. Apparently he forgot that the trail takes a dogleg left and an oncoming bike with both 100s of lumens on the handlebars and on the rider's head blinded him - he rode right off the trail into the grass, but surprisingly didn't lose control. Apparently embarrassed, he tried to power back onto the trail but then the wet leaves kicked in and he almost crashed as he spun out.

No doubt to solve this he went to Performance (or the equivalent) and bought 1,000 lumens of help so as to join the "more is better" club.

Oh well.
Posted by michael neubert at 9:58 AM