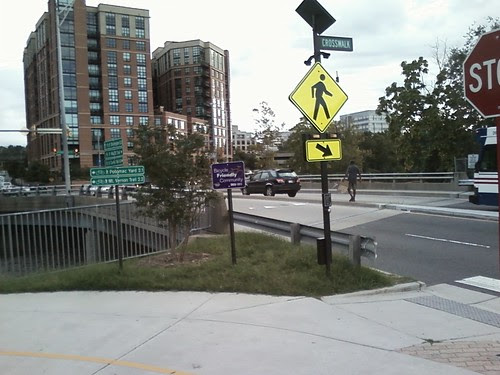 A crew appeared today and installed the sign stating this is a "bicycle friendly community." (I realize I don't know if those signs stating the distances to various places were there before or not - I don't think so.) The sign faces the bicycle trail, as this picture mostly makes clear. There are several problems with this:

* The ones who need to hear this kind of thing more are the motorists in the sense of, "hey, don't run over the cyclists; this community is supposed to be bicycle friendly!" Ironically this sign is posted right at one of the worst crosswalks for cyclists in Arlington. Arlington is bicycle friendly, and by the way try not to get hurt crossing this street with cars zipping off 395.

* I suppose pointing this sign celebrating the League of American Bicyclists' designation of Arlington as a "bicycle friendly community" is fine but in the end, it's deeds not words. We aren't going to think, "oh yeah - Arlington loves cyclists because they put up this sign. We are going to think that because of useful things that the County does for cyclists (and their safety), which does not include the layout of this particular intersection (from a cyclist perspective).

It reminds me of socialist realism to have a sign proclaiming the glories not of today's reality but tomorrow's shiny future.
Posted by michael neubert at 8:45 PM