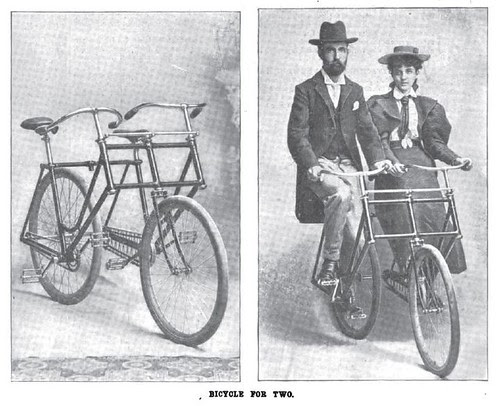 From the January 4, 1896 issue of Scientific American

Full text of the article describing this side-by-side tandem bicycle that goes with the above illustration:

THE PUNNETT COMPANION SIDE SEATED BICYCLE.

The bicycle has now reached a typical construction from which there seems to be slight tendency to deviate. Absolute novelties beyond the details are more and more rare. The companion side seated bicycle which we represent is. however, one of the novelties of the year. The tandem bicycle, which has met with considerable success where the desire is to have company on a ride, is more or less criticised on account of the position of the riders, one of whom must be behind the other. In the bicycle which we illustrate it is proposed to have the two riders seated side by side, as in the old-fashioned "sociable" tricycle, and yet to have the two riders carried by two wheels only. The two cuts are self-explanatory. The long axle of the rear wheal enables the use of two sprockets at its extremities so far apart as to permit of each one being acted upon through a separate pair of sprockets, each actuated by a separate rider. There is a triple head and a duplex frame, the latter carrying two saddles placed side by side at a proper distance apart for two riders to occupy also side by side.

It is said that a difference of 100 pounds weight in the two riders is not noticeable, and that a person who is ignorant of riding can be taken out on this wheel with perfect safety. The system of mounting is peculiar. For the first one who mounts, the wheel is inclined to one side and this rider takes his or her place on the lower saddle. The machine is then pulled back to an upright position and the second rider mounts by the pedal, and so the start is made. The dismount is made in the same way, reversing, of course, the operations. The two saddle posts are connected, it will be observed, by a crossbar. At the center of the crossbar is a special socket. When a single person fa riding the wheel the saddle is transferred to the central position and the rider sitting there drives the machine by one of the right hand and one of the left hand set of pedals. This, of coruse, produces considerable lost motion in the pedal action, but it at least is possible for a single rider to take care of and to drive the wheel to and from the place of appointment with his friend. It is not a wheel depending absolutely on the presence of two riders. The wheel shown in the illustrations is made by the Punnett Cycle Mfg. Co., Rochester, N.Y.

I can't work out if this really could work or not - apparently it did, but it seems difficult to manage, to say the least.

Original article is here
Posted by michael neubert at 11:36 AM