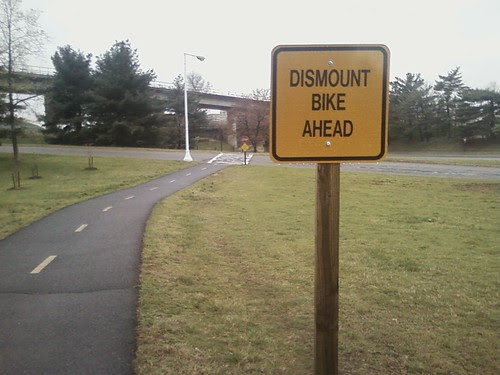 Sign added to bike trail April 7, just before the governement was expected to close

I think this is very odd - Thursday morning two trucks of U.S. Park Service personnel were pulled up along the bike trail to install this sign. Is this really important?

The southbound cyclist, before this sign, would arrive at a stop sign and one that also demands a dismount - I have never seen anyone do so. The trail crossing is zebra striped and looks like a cross walk to the drivers leaving National Airport - the traffic is one way, from left to right in the picture. What generally happens is that cyclists slow, the cars slow, sometimes the car stops and wave the cyclist or cyclists on, sometimes not and then the cyclists stop.

Providing a notice (now two!) that dismount is required just makes cyclists into scofflaws in this instance. There are, I think, some locations where dismounting is sensible, for example the crosswalk across S Shirlington Rd after going under I-395 on the bike trail. The crosswalk has lights to attract attention of drivers that are activated by a button and it seems reasonably for cyclists to dismount here (and a lot safer). 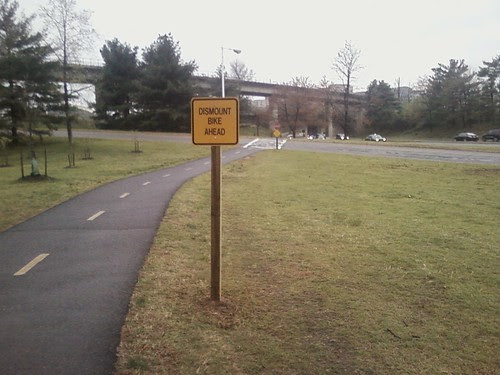 Couldn't they have planted more trees instead?
Posted by michael neubert at 5:01 PM