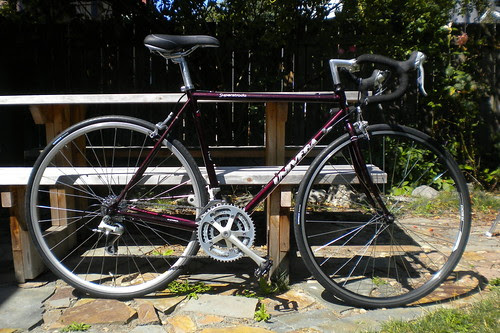 Short article about Japanese bicycle industry in 1896, from the Morning Times of Washington DC, September 13, 1896 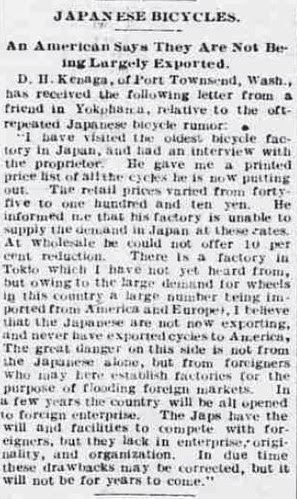 JAPANESE BICYCLES.
An American Says They Are Not Being Largely Exported.

D. H. Kenaga of Port Townsend, Wash., has received the following letter from a friend in Yokohama, related to the oft repeated Japanese bicycle rumor:

"I have visited the oldest bicycle factory in Japan, and had an interview with the proprietor. He gave me a printed price list of all the cycles he is now putting out. The retail prices varied from forty five to one hundred and ten Yen. He informed me that his factory is unable to supply the demand iu Japan at these rates. At wholesale he could not offer 10 per cent reduction. There is a factory in Tokio which I have not yet heard from, but owing to the large demand for wheels in this country a large number being imported from America and Europe, I believe that the Japanese are not now exporting, and never have exported cycles to America. The great danger on this side is not from the Japanese alone, but from foreigners who may establish factories for the purpose of flooding foreign markets. In a few years the country will be all opened to foreign enterprise. The Japs [sic] have the will and facilities to compete with foreigners, but they lack in enterprise, originality,
and organization. In due time these drawbacks may be corrected, but it will not be for years to come."

In 1897, the Yen was worth about fifty cents to the U.S. dollar according to a Wikipedia article. So these prices were (in theory) about half the U.S. range for bicycles at the time.

Thus it would seem that at this early period of industrial production in Japan there was a concern in the U.S. that inexpensive Japanese bicycles could or would flood the American market. (Presumably that potential flood is what is meant by "oft repeated Japanese bicycle rumor," above in bold.)

Short piece in the magazine "Cycling Life" for bicycle tradesmen, 1896 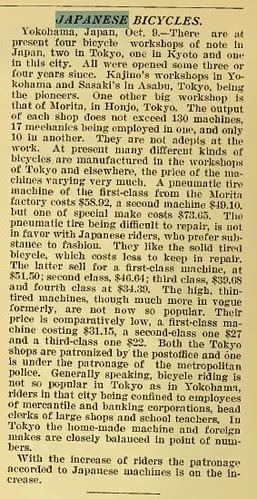 Yokohama, Japan, Oct. 9.—There are at present four bicycle workshops of note in Japan, two in Tokyo, one in Kyoto and one in this city. All were opened some three or four years since. Kajiuo's workshops in Yokohama and Sasaki's in Asabu, Tokyo, being the pioneers. One other big workshop is that of Morita, in Honjo, Tokyo. The output of each shop does not exceed 130 machines, 17 mechanics being employed in one, and only 10 in another. They are not adepts at the work. At present many different kinds of bicycles, are manufactured in the workshops of Tokyo and elsewhere, the price of the machines varying very much. A pneumatic tire machine of the first-class from the Morita factory costs $58.92, a second machine $49.10, but one of special make costs $73.05 The pneumatic tire being difficult to repair, is not in favor with Japanese riders, who prefer substance to fashion. They like the solid tired bicycle, which costs less to keep in repair The latter sell for a first-class machine at $51.50; second class, $46.64; third class, $39 GS and fourth class at $34.39. The high, thin tired machines, though much more in vogue formerly, are not now so popular. Their price is comparatively low, a first-class machine costing $31.15, a second-class one $27 and a third-class one $22. Both the Tokyo shops are patronized by the post office and one is under the patronage of the metropolitan police. Generally speaking, bicycle riding is not so popular in Tokyo as in Yokohama riders of that city being confined to employees of mercantile and banking corporations, head clerks of large shops and school teachers. In Tokyo the home-made machine and foreign makes are closely balanced in point of numbers. With the increase of riders the patronage accorded to Japanese machines is on the increase.

This author does not seem concerned about imports of Japanese bicycles to the U.S. but rather interested in trade heading the other direction. From time to time Cycling Life would report export figures of bicycles to different countries, including Japan, although by today's standards the figures would generally seem modest, Japan was generally in the top half.
Posted by michael neubert at 9:04 AM