OK excuse me for a little grumpy kvetching. 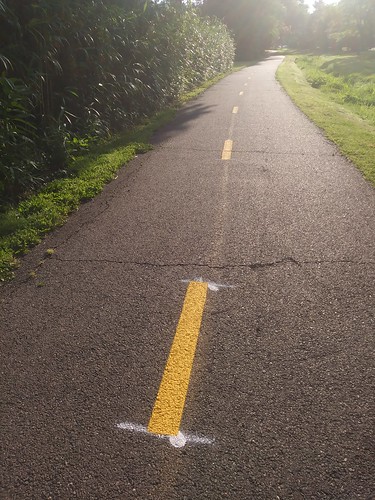 Above is part of the multi-use trail near my house, that runs next to a steam called "Lucky Run." Streams in this part of the world are often called a "run" (for running downhill, I guess). The stream is the right.

Riding home from work a while ago, I came across a private company with road type equipment applying these nice new painted yellow lines the trail. A worker encouraged me to avoid riding through the fresh paint. Yes . . . the trail has been here all the 25+ years I have lived here - the previous yellow lines had faded into oblivion but apparently someone decided to spend a few dollars to freshen that aspect up.

I have no problem with spending money on the trail - far from it. However as money to spend on this trail, and most others I see, applying yellow lines seems far less useful than doing some maintenance. As you can see in the photo, there are cracks in the asphalt. It is possible to apply some glop (sealant) on those that keeps water from building up below, then freezing and expanding and creating bigger raised cracks, which are prevalent elsewhere along this trail. If such raised cracks appear, they can be ground down and then sealed. (This was done about five or so years ago on the Mount Vernon Trail at some point when the National Park Service must have been better funded - it greatly improved the trail.)

I don't see the need for the yellow stripes on a trail like this, really. This is not a little roadway. The most important thing for all trail users is to apply common sense in their use of the trail. 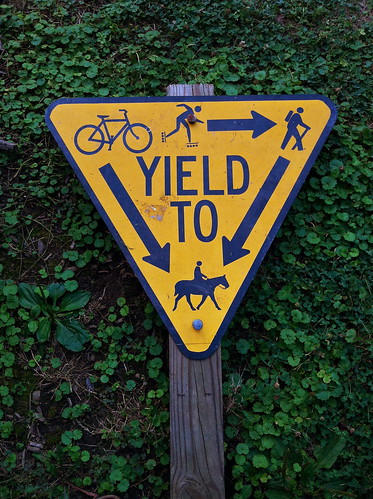 Who yields to whom? An Arlington County sign with different users

As it happens, this particular Arlington County sign is not from near my house but elsewhere on the trail network. Arguably these are becoming less common because horses on County trails are almost nonexistent (at least around this southern part of the County). While intuitively it makes sense that people on wheels (cyclists and also skaters) yield to foot traffic (here for some reason hikers, not simply people walking) I suspect all that is meant by that is that cyclists aren't to force walkers off the trail from behind. I am a bit suspect of the Virginia use of the word "yield" in such laws since all that motorists have to do for pedestrians (or cyclists, by the way) in a crosswalk is "yield" while in DC the motorist must stop. Hmm. 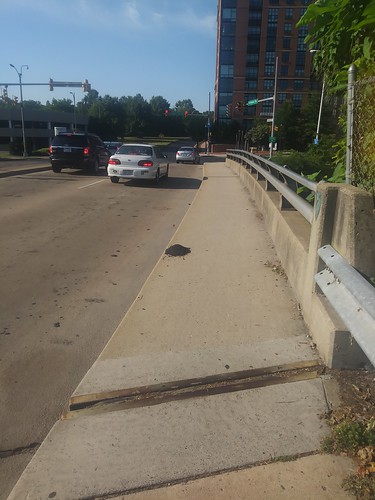 Meanwhile elsewhere on the local trail system a company doing some road resurfacing left a six inch tall pile of asphalt on the small sidewalk that in this particular location connects to wider segments of the local multi-use trail network (and is reasonably heavily used, in fact).. Thank God no one has had the idea to put a yellow link down the middle of this. This is a location where most people thankfully do apply common sense; for example, I usually stop my bike if another bike is coming - it is too narrow for two oncoming bikes to get by one another without some avoidable risk. Or sometimes the oncoming cyclists will stop first. The asphalt, already here for about five days, just adds to the fun.
Posted by michael neubert at 4:29 PM