A rather fanciful article about a then-famous singer, Lillian Russell, in the New York Journal that was for the time a daily newspaper with more pages to fill than most as well as presumably more readers to attract, so apparently they were inclined to long dramatic reports. 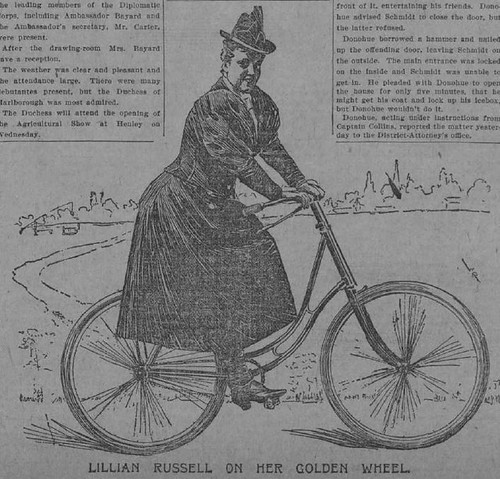 LILLIAN RUSSELL'S UNLUCKY CYCLING, Thrown from Her Golden Wheel and There Are Disastrous Consequences.

In Collision with Another Bicycler Where Miss Schumacher Was Killed.
She Sprains an Ankle Badly, and That Is Only the Beginning of Her Troubles.

THEY ENSUE ON A HARLEM STAGE, While Singing in the "Little Duke" Her Ankle Weakens and She and Fred Solomon Fall Flat Before the Audience.

Lillian Russell, diva and wheelwoman, played an engagement with her famous golden bicycle at Manhattan avenue and West One Hundred and Sixth street yesterday afternoon that had not been advertised, and that very nearly resulted In serious injury to the noted singer.

By a strange coincidence her contretemps took place just at the place where Miss Theodora Schumacher met her death April 30, and Miss Russell, who is not at all superstitious, now says she believes "In that sort of thing a little bit."

Miss Russell went for her usual ride in Central Park yesterday afternoon. She wore a tan bicycle suit that fitted as if she had been melted and run Into it, and the gold lace with which it was trimmed was just sufficient In quantity to suggest the pomp and circumstance of the stage.

WAS AT HER BEST.

To the gay throng of riders and drivers along the West Drive the fair Lillian never looked prettier. She sped along at a merry pace, threading her way In and out of the procession of T-carts, broughams, phaetons and other park traps without self-consciousness. Every one turned to look after the well-rounded figure, and the gorgeous bicycle upon which it was so advantageously set off.

"She may lose her voice," It was remarked, "but so long as she has that bicycle we will adore her still."

That was but one of the comments her appearance called forth.

Miss Russell turned out of the Park at the One Hundred and Sixth street gate leaving tho policeman there bewildered by one of those smiles that it is her habit to bestow with such effectiveness.

A scorcher ice wagon was coming up Manhattan avenue at a pace that should have called for police interference. Miss Russell saw it. but she could not see the bicycler who, just at its far side, was riding hard to beat the Iceman and so rebuke the entire Iceman fraternity.

"Hi, there!" shouted the driver.

Miss Russell took that as her cue to dodge, and her experience having led her to be prompt when she hears her cue she wheeled suddenly to the left. The Iceman tried to pull up as best he could and his horses just missed the distinguished rider.

Rut the bicycler beyond had no time. He had not seen Lillian nor the glitter of her golden wheel and he ran full into her. There were yells from bystanders and the two bicycles seemed to be doing a golden skirt dance in which some hosiery was shown. Prom out the confusion came feminine Grand Duchesse's screams. The ice man pulled up and ran to solve the golden puzzle. Bystanders and a policeman also came, and with difficulty Miss Russell was extricated from the Involved situation. She was bruised and the pretty costume was pretty no longer. Her ankle hurt her, and the golden wheel was as If it were a game of jackstraws in which the trick was to pick out the back bone.

The man apologized so nicely that Miss Russell refused to make a complaint against him. The Iceman called a cab and the diva was helped into It and driven to her house, at No. 318 West Seventy-seventh street.

The article goes on to talk about her performances after this incident, which were affected by the injury to her ankle somewhat.

As it happens, the illustration in the article was taken from the photograph used to produce this item from the Library of Congress photograph collections - Lillian Russell is at the lower right: 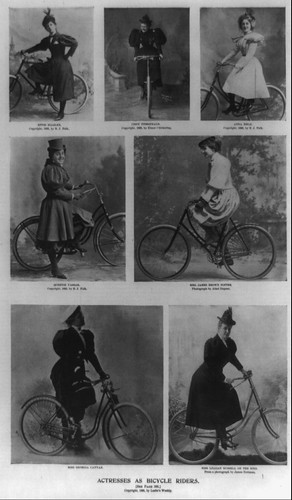 Reading the wikipedia description of Lillian Russell, it turns out she was influential in a law passed in 1924 to limit immigration from certain parts of Eastern Europe (from which some of my in-laws ancestors came) as well as entirely from Asia. So while I guess I will publish this blog post it is not intended as a celebration of her views on that. At all.

Email ThisBlogThis!Share to TwitterShare to FacebookShare to Pinterest
Labels: 1896, photos