The above video isn't specific to DC

This article from a transportation think-tank suggests deliveries will start later this year.

By the end of this year, Washington, D.C. will be the inaugural testbed for a new type of delivery service: last-mile ground deliveries, performed by robots, for the low cost of $1.

Starship Technologies, a European company, is working with the D.C. City Council to establish a first-of-its-kind pilot program that will allow the company’s robots to conduct package, grocery, and food deliveries within city limits.

The company’s robots are a couple of feet tall and take up the same amount of space on the sidewalk as a pedestrian. Weighing in at 30-35 pounds, the inexpensive robots are equipped with nine cameras, two-way audio capabilities, and a lockbox for its cargo.

“They’re social robots,” explains Henry Harris-Burland, Starship’s marketing and communications manager. “The robot acts like a pedestrian and it knows it’s at the bottom of the food chain.”

From a cyclist's point of view, it is interesting and perhaps amusing that DC's central business district legal ban on riding a bike on the sidewalk is suggested as a plus - "Another advantage to testing in D.C., in addition to its low-density development, is that cyclists are banned from riding on sidewalks within its perimeter." The article has a map of the DC "no riding on the sidewalk!" area, which I suspect would be news to many who ride bikes in DC, based on my observations. Hopefully the robots won't be too surprised when it turns out there are some bicycles on the sidewalk being ridden after all.

Per this article the droid-delivery-bot operates autonomously unless it gets into trouble, in which case the remote operator would take over.

One wonders what if any cues the robot takes from pedestrians walking along with it - DC pedestrians are not known for being law abiding, I would say. (When I travel to Seattle I always have to remind myself of this local trait that I have acquired.)

What may have worked in Estonia to deliver pizzas may be more challenged by the US capital city. I guess we'll see. I can't say I'm looking forward to having short bots to watch for in addition to all the rest of it.

Of course there is the other aspect of it - didn't people on bicycles used to deliver stuff? Oh, sometimes they still do! Well, for the moment. 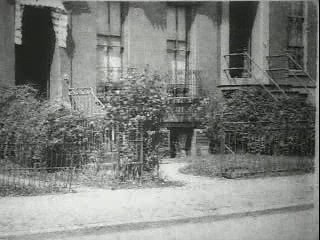 DC postman speedy delivery by bike (from a while ago . . . )

Posted by michael neubert at 6:22 PM