"Speed Kills" - According to the Seattle Dept of Transportation

The Seattle Bike Blog has a recent post about e-bike versions of LimeBikes that is interesting to read. The description of the apparent success of dockless bikeshare in Seattle is intriguing since their attempt at "traditional" docked bikeshare was a failure, only getting to 500 bikes available before being shut down. And now they have dockless e-bikes too. 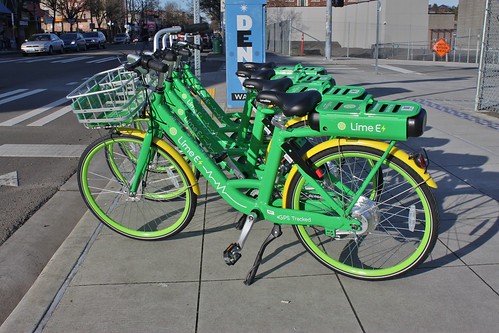 The blog post talks about how the LimeBike e-bikes only provide powered assist up to about 15 miles per hour. This is explained as follows: In part, this is for safety and liability concerns. As the Seattle Department of Transportation regularly reminds us, pedestrians have a one-in-ten chance of death when a driver collides with them at 20 mph. For LimeBike, any crash or collision at that speed is a serious liability.

I first read that (too quickly) as having to do with the speed of cyclists, not cars, and involving cyclist crashes - thus getting two aspects wrong. Oh well. There probably aren't good numbers about how the speed of a cyclist relates to crash outcomes, but it likely that the faster one is going, particularly beyond 20 mph area, the more likely the outcome will be more unpleasant (for the cyclist - and also for whoever he may run into who isn't in a metal box).

This is why I am often unhappy with the so-far relatively few e-bike equipped bicycle commuters I see whose main goal seems to be to emulate car-like average transportation speeds on their overall commute, chugging along the Mt Vernon trail along the Potomac at between 20 and 25 miles an hour (and beyond). Counter-intuitively many such riders are highly disinclined to slow down when presented with traffic or to exercise what would seem like common sense, instead passing at the highest speed manageable with little apparent interest in anyone's safety. (Of course, this is not true of all e-bike commuters, some are a little more safety minded, thankfully.)

The speed limit for cyclists on the Mt Vernon trail (as one example) whether riding an e-bike or a regular one is 15 mph, so someone traveling at 22-24+ mph is traveling well in excess of the speed limit. Now if there is a fantastic tailwind (which is very rare with the direction of my commute) I may average 20 mph for a while but 16-18 is more typical as my high speed - also exceeding the speed limit, but only by ten percent or so, and not exceeding the 20 mph "death zone" speed.

It is also relevant that the trails are used by persons on foot, running or walking, and that the trails around here are typically not very wide or all that well maintained. The mix of 3 mph walkers and 23 mph e-bikers on these trails is not good for anyone.
Posted by michael neubert at 9:38 AM