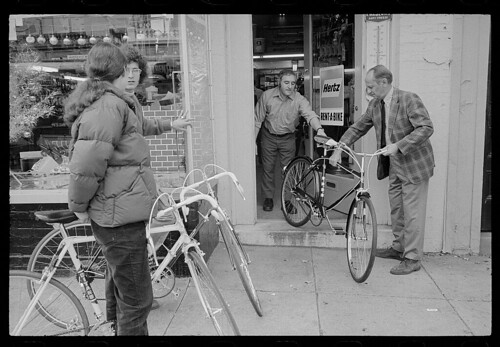 The Library of Congress has a collection of older photographs from the US News & World Report, including many that never appeared in the magazine. These are occasionally being digitized and put online, which is nice since they are in the public domain.

The photographs sometimes have discernible context but often not - here, it isn't clear why this photograph was taken - what news story would have been supported by such a photograph.

A store called "District Hardware" still exists in Washington DC. I confirmed by email with the grandson of the man pushing the bike out the door that this was an earlier location for the same store in Washington. And that Hertz really was in the rent-a-bike business in the 1960s-70s. Crazy.

Posted by michael neubert at 10:34 AM