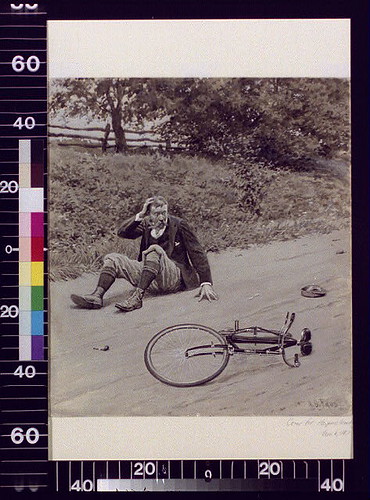 The digitized version is not of very high quality since it was digitized from a photographic reproduction of the original item. That is why it has the color bar and rulers.

Detail from the above illustration

Above is a zoomed in view of the bicycle taken from the TIFF image - the level of detail, because this is digitized from a reproduction and not the original illustration, is not particularly good but at least provides enough to show that the person doing the illustration captured accurately the details of an 1897 bicycle.

You can tell it is a "fixie" as it would be called today - that is, the chain drive doesn't spin freely when the rider is not pedaling, the pedals move in concert with the back wheel. The easiest way to slow down or stop was simply to slow down or stop pedaling. This bike has a small post on either side of the front fork that stick out so that a rider could remove his feet from the pedals and rest them on the fork to allow the pedals (and rear wheel) to spin freely while descending hills - getting the feet back onto the pedals was tricky, but this bike also came equipped with a simple "spoon brake" that is visible - that is, a levered brake actuated by the right hand that pressed a post downward to the front tire, pressing a block of some material (perhaps also covered in rubber) against the tire to slow the bicycle. This can be a moderately effective braking system but if used frequently it was hard on the front tire. Certainly it was better than nothing! (And such brakes are still in use on bikes in many parts of the world.)

Posted by michael neubert at 10:05 AM

Email ThisBlogThis!Share to TwitterShare to FacebookShare to Pinterest
Labels: 1890s, illustrations of cycling