My 2,000 Character Response to WaPo Article on Bicycle Commuting

The Washington Post has an article, "Cycling to work means better health and a longer life. Here’s how to get started." that I made a comment on (that will be lost in the sea of comments, which is probably just fine). I have reproduced it here. You only get 2,000 characters for a comment! 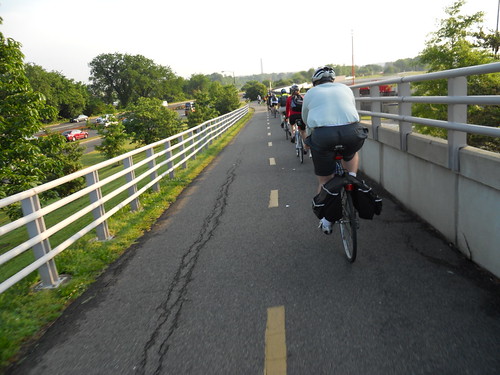 I'm not sure that the approach provided that much useful "here's how to start" guidance but as a selection of somewhat inspiring stories with some selected suggestions it is fine.

About the e-bike commuter, it says, "And she gets to work without sweating, traveling nearly as fast as a car." Since we are talking about pedal assist bike, and since this is Washington DC, this seems unlikely on hot days. Simply standing around outside is enough to start sweating in much of July-August, and although the self-generated breeze from riding does carry away some perspiration, you can't get away from some sweating. And the "traveling nearly as fast as car" suggests a high rate of speed but it is really more the slow-and-steady-wins-the-raise over automobiles that kill a lot of time in traffic jams. Those e-bike commuters I see who want a high rate of speed, which is certainly possible with some of them (over 25 mph on some pedal assist bikes) often create hazards for themselves and others, particularly when on multiuse trails that were intended for around 15 mph max.

The article doesn't include the suggestion that seems most useful to me - anyone thinking about this is likely to have seen a neighbor who is a bike commuter - the thing to do is to ask that person their advice. A lot of getting started is overcoming certain seeming obstacles specific to a location that a neighbor can likely help with. And this ties in with a pleasing aspect of bicycle commuting, which is that most of us eagerly help each other. It's a community you get as part of being a bike commuter.

Posted by michael neubert at 12:10 PM