LimeBikes on the Mall (Dockless Bikeshare Arrives in DC) 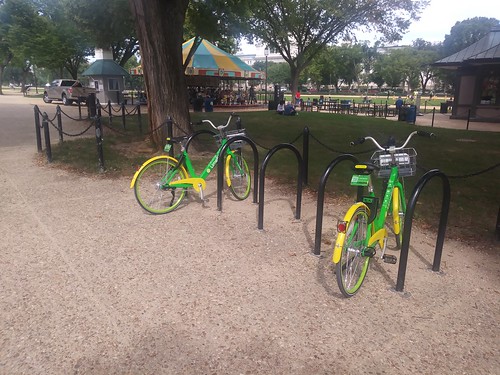 I almost wonder if the LimeBike people put these here like this, or if some users actually left them aligned with this bike rack. I have yet to see a MoBike bicycle around, but two days after these were announced as being available (I think that's right) here these are at lunch time on Friday September 22.

When I rode home hours later, I saw another one parked on a sidewalk along Independence. It was not near a rack, just standing on the sidewalk held upright by its kickstand. Because people here are used to bicycles being locked to something, these bikes seem odd just standing with a lock merely disabling the back wheel (using a Dutch bike approach). In the above case, the bikes are nicely placed near bike racks, which I suppose keeps them more likely to remain upright but also makes it harder for anyone else to use the rack as intended. Hmm.

I loaded the MoBike and LimeBike Android apps. The MoBike app was a lot more intrusive, more or less asking if it could have access to everything on the phone. Really? Why? I declined to give access to anything other than location, so perhaps that it why the map labels displayed in Chinese - a map of Washington DC, but still. The MoBike app was also in a big hurry to have me "top up" an account with some $ from a credit card. Whoo, let's see where these bikes are, first! The LimeBike app seems to be tailored for the US, which is a better approach I would say, and only wanted to know my location, which makes sense. It noted that the first ride is free and didn't start hitting me up for $. So aside from the fact that I have seen LimeBikes near where I work in DC (and not a MoBike) I already like LimeBike better than MoBike.

I'm curious to see if dockless bikeshare can work in Washington DC that already has a successful "regular" bikeshare system. My doubts include whether people will really park them properly (whatever that might mean, which isn't clear to me, except that certain kinds of bike parking will not work well) and whether a system that only locks the bike wheel and not the bike to a fixed object can work. Among other doubts . . .

I might give one a try. We'll see. First ride is free, after all.

As an aside, I did manage easily enough not to use a car on "Car Free" day (9/22/2017) but it was pretty much business as usual, commuting to/from work on a bike and not going anywhere in the evening requiring a car. So I'm not thinking I should give myself too much credit for that one . . .