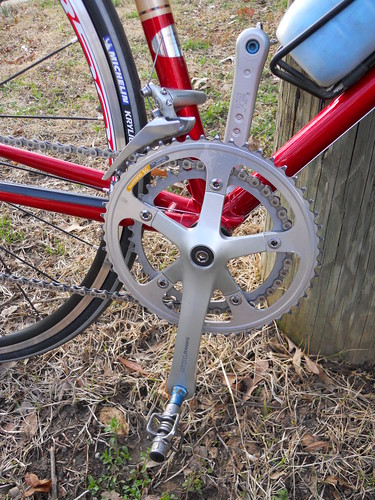 The first set of chainrings I installed on this 1982 bike frame - large ring 53 teeth, small ring 39

Most road bikes sold say ten years would have two chainrings (the ones in front, with the pedals) that would have 53 and 39 teeth. (Bikes with drop handlebars that look like a road bike but intended for touring and climbing long inclines would have an third smaller "granny" gear chainring, too.) This 53 by 39 combo is what I ended up with when I equipped the 1982 Bridgestone frame with some Shimano chainrings I found on eBay ("lightly used"). In back I have only seven gears, running from 11 teeth to 28. We don't have much by way of serious hills around here (or what few there are, I mostly manage to avoid) so this worked fine as far as far as hill climbing is concerned. Still I felt that I ended up having a lot of gear options that were simply out of range for most (or all) of my riding. That is, when riding with the 53 tooth chainring in front I didn't use the smallest two gears in back at all and the next ones not very much. I sensed that having fewer teeth on the front chainrings would improve my shifting patterns. I would probably be able to ride a more on the large chainring and not most of the time on the smaller one. 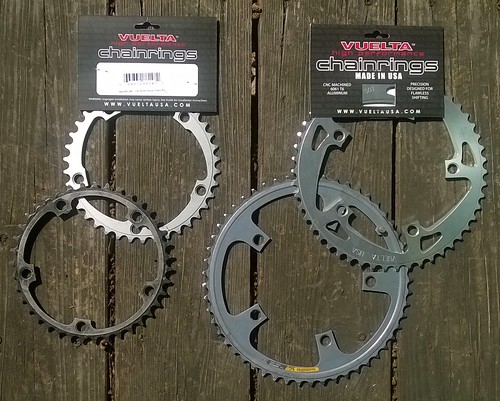 The two new U.S. manufactured Vuelta chainrings I found on the Internet

I did a certain amount of research. I eventually concluded that I could live without shaped teeth to assist with shifting, the so-called ramps, and so I didn't worry about that as a feature of the chains I was looking at. It became clear that the smallest small chainring that will fit on my bike would have 38 (rather than 39) teeth, but there were more options for the front chainring - I settled on 50 teeth. At first I was looking at Sugoi chainrings, but eventually I came upon Vuelta and that you can buy the Vuelta chainrings directly from the factory. And that the chainrings are made in the U.S. So I bought them from Vuelta - both of them were a little over 50 bucks. 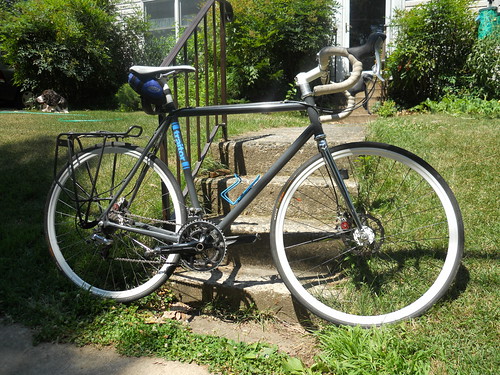 A bike I still own, but never ride (which is a separate, annoying story) with a "compact crank"

I already have a road bike with 50 teeth on the front chainring - this Traitor that I bought new in 2009. I have had some problems with the brakes and generally fell out of love with this bike, so I am not using it, but the small large chainring was good. I could not just "borrow" (take) rings off of this bike (as I have taken a number of other components since I am not riding it) because the bolt arrangement to attach to the "spider" (the five arms that extends from where the crank arm for the pedal attached to the bottom bracket) is smaller to allow the small inner chainring. This allows the small chainring to have 36 teeth. I didn't want to buy a new spider and pedal arm just to get from 38 to 36 teeth on that ring.

Replacing the chainrings is easy as bike repairs or maintenance goes if you have the right tools, which were included in some set I bought a few years ago (fortunately). It took less than 30 minutes at a leisurely pace of work. I didn't move the front derailleur down closer to the chainrings but when I checked, the front derailleur shifting was still good - I don't see any reason to mess with the location of the derailleur in that case!

The results are great - as I said, I don't have hills so the improvement provided by one less tooth on the smaller ring is probably mostly in my head for what little use I make of the lowest gear available, but I can tell that having 50 instead of 53 teeth on the larger chainring is a noticeable and pleasing improvement. Yay!
Posted by michael neubert at 6:09 PM

Email ThisBlogThis!Share to TwitterShare to FacebookShare to Pinterest
Labels: chainrings