Folding Bikes Now and Then 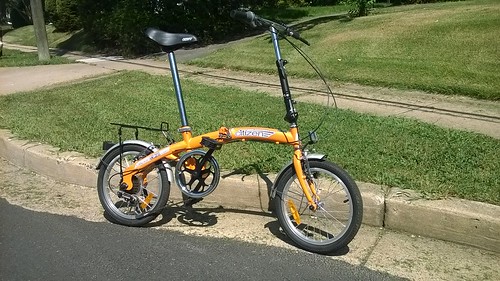 My new cycling acquisition (a gift at no cost)

The folding bike has been around longer than you might think . . . . . 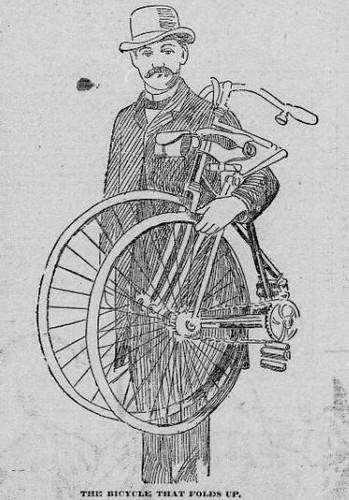 Bicycle inventors come thick and fast. American inventive genius apparently has concentrated upon the wheel. Every week some inventor comes forward with some new device designed to make cycling easier or safer or faster or to make a wheel lighter. In France, however, the inventors. are experimenting with petroleum-driven bicyclettes. Why petroleum is better than the human leg, and why the "machine should be dubbed bicyclette are questions only a plausible Frenchman can answer. The petroleum bicyclette participated in the recent road race between Paris and Bordeaux. It gave a good account of itself.

A folding bicycle is, the newest novelty in the steel steed line. By a simple and ingenious arrangement the connecting rods of the frame may be folded until the machine is reduced to the size of one wheel, as shown in the illustration.

The inventor claims for the folding bicycle the possibility of storing it in one's room, the ease with which it may be carried up or down stairs or hoisted in dumbwaiters or elevators. It can be readily, doubled up for carrying on the shoulder up and down bad roads. Such a bicycle can be readily placed in a carriage or other vehicle for transportation. Doubtless, also, the policeman who has had an experience in leading the bicycle of a prisoner to the stationhouse will appreciate the merits a machine that can be folded up and carried under the arm, where it is powerless to work injury.

The inventor claims further that in its folded shape, the bicycle may be securely locked, but seems to forget that in its portable shape it presents an extraordinary inducement to the intending thief.

The folding bicycle is one of the things that, now that it has been invented, will cause people to wonder why it had not been thought of before. Dwellers in flats, however, where there are tenants given to storing their wheels in the lower hallway will be inclined to send their personal thanks to the genius who has shown how the most unwieldy thing ever invented - that is, while in state of repose — may be made less obtrusive and less dangerous. There is no reason why it shouldn't be hung up on a peg out of everybody's way.

The man who invented the baby carriage which could be flattened out and jerked under the bed or stool against the wall behind a sofa worked a great benefaction. It was the best thing since the jointed fishing rod. Then a Brooklyn man invented a piano which could be readily be taken apart and carried up the narrow stairways of an apartment house and, then set up in a little room, instead of being swung into an outside window, as a safe is generally put into an office building. But there are more bicycles than there are either baby carriages or pianos in New York, so for the present the inventor of the folding, bicycle is entitled to a seat on the right side of the throne.

Posted by michael neubert at 3:27 PM