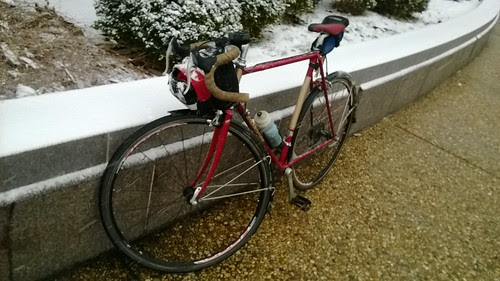 On Tuesday it was starting to snow when I got up in the morning and starting to accumulate a little on the trails when I was ready to take off for work. Still, the promised weather for later was that the snow would stop, the sun would come out, and there would be enough warmth for all this to go away.

In previous experience, I have found that riding a road bike in fresh snow where there is no ice underneath can be easier than riding a mountain bike with big wide tires - and it seemed I wouldn't need any sort of special snow or ice compensation for the ride home. So I chose to ride my 1982 steel road bike (or whatever one calls such a thing) to work. I lower the tire pressure a bit to improve grip.

On the trails the snow was less than an inch, generally (that is, less than 2.5 centimeters). After a while I started hearing a high pitched noise from a tire in contact with something and realized that the way the rear fender is fitted, snow was building up at the back and pressing against the tire, making the noise. It didn't seem to be causing me to work noticeably harder, however.

When I crossed the 14th Street bridge into Washington, however, the snow was deeper on the bridge section set aside for pedestrians and cyclists and somehow the difference meant snow was building up under the fender enough to slow me down. The bridge is long enough that it was beginning to wear, but for whatever reason it got to a certain point and didn't get so bad that I was stopped. 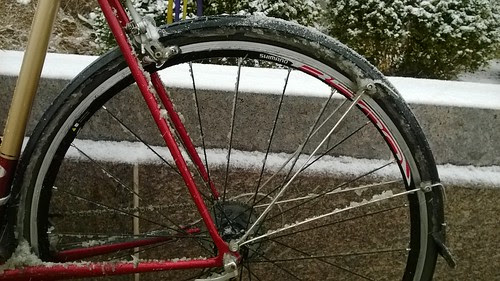 Snow built up under rear fender in particular

The above photos are after I got to work (but before I entered the parking garage, which since it is heated, quickly melted all this messiness). In DC there was much less snow and almost none on the roads I was riding on, but you can still see the build up problem.

Posted by michael neubert at 9:53 AM