Book about Schwinn HIstory in the Pubic Domain 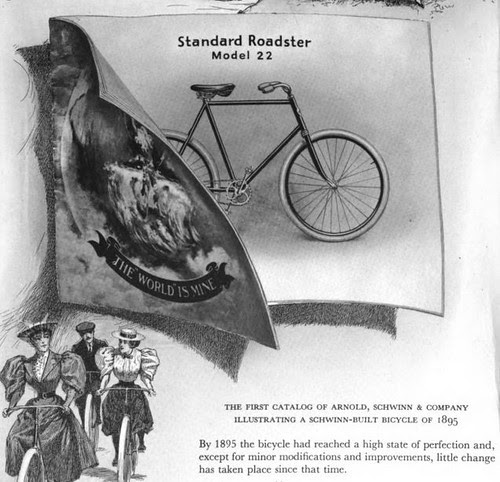 Page from this company-sponsored history of Schwinn from 1945

Fifty years of Schwinn-built bicycles: the story of the bicycle and its contribution to our way of life. Arnold, Schwinn and company, Chicago. 1945. No author is given on the title page, but the dedication is from Frank Schwinn, son of the company founder, Ignaz Schwinn.

Typically books published after 1922 in the U.S. are still covered by copyright, but if published before 1964 (I think) then copyright has to be renewed after 28 years or the book goes into the public domain. Or perhaps the University of Michigan where this was digitized cleared the copyright otherwise somehow. Anyway, the full book is viewable through HathiTrust.

While primarily a book about Schwinn, looking back from 1945, there is quite a bit of general cycling history in this too (albeit presented in summary). There are some interesting photographs comparing a Schwinn factory in 1895 and 1945, and some discussion of the development of bicycle technology as it relates to technology in (then) automobiles and even airplanes. In many ways it is more interesting for someone interesting in Schwinn and bicycles than the much more recent No Hands that was published in 1996 but is more about Schwinn as some kind of extended business case study. (350 pages, published by Henry Holt & Co.) 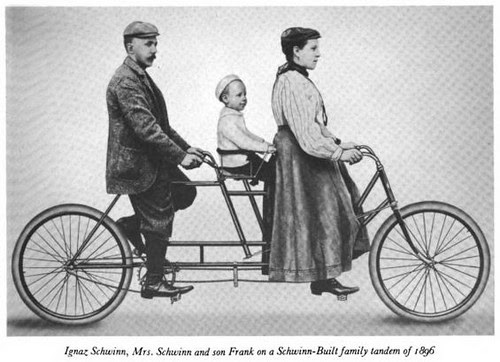 The Schwinn family on a bicycle built for three

Schwinn's introduction of the balloon tire in 1933 is described in detail and makes clear that the bicycle industry in the U.S. following the initial craze of the 1890s had been negatively affected by the "single tube" tire that was difficult for individuals to repair but cheap for bicycle makers to sell. 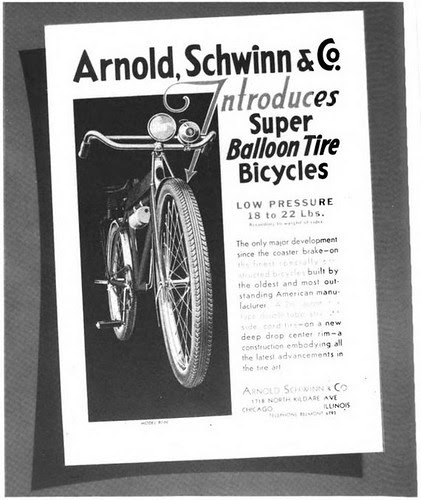 Ad for Schwinn's 1933 bike featuring a balloon tire in the U.S.
Posted by michael neubert at 9:39 AM