In searching the many websites that provide digitized materials from the 1890s (of particular interest to me) I can say that the amount of "metadata" provided by different organizations for digitized "content" (stuff from their collections) can vary widely. In particular as to whether there is anything relevant to cycling history. 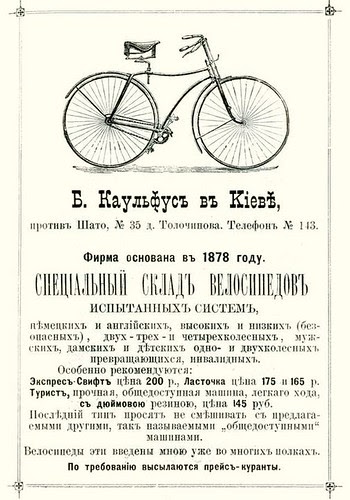 Thanks to extensive annotations, the World Digital Library generally has more searchable target terms available than many sites. Here is the "description" of the digitized Guide to Kiev and Its Environs, Including an Address Section, Map and Phototype Views of Kiev (1890)


This 1890 guidebook provides comprehensive information for visitors to Kiev. It includes a history of the city and details of places of interest, such as Kiev-Pechersk Lavra, the cathedrals and other churches, historical monuments, public gardens and wooded areas, public and administrative buildings, and bridges over the Dnieper River. Included is useful information for travelers, such as timetables for trains, steamships, and other passenger transport and a directory for hotels, restaurants, doctors, banks, stores, baths, libraries, clubs, and city and church authorities. The guide anticipates by 24 years Baedeker’s guide to Russia and is much more detailed. Also included are maps showing key attractions and local streets. The guide was published at the time when Kiev was becoming a significant industrial center, which is reflected in the directory and advertising section. Pages of advertisements are devoted to various agricultural machines, equipment for steam and water mills, pipes, steel for building railroads and bridges, steam engines and boilers, and other industrial products. More personal items on offer include fabrics, bicycles, hats, wine, fruit trees, furniture, and teas.

I was hoping to find several such ads, but it turned out there was just the one ad for a bicycle shop, B. Kaul'fus (as rendered in Cyrillic, here transliterated). Although Ukraine became the center of bicycle production in the Soviet Union, the bicycles for sale at this time in Kiev are said to be imports from Germany and England. This was very early in the days of "safety bicycles," that is bicycles with two equal sized wheels and use of a chain to transmit power from pedals to rear wheel rather than a "penny farthing" high wheel bicycle. It is somewhat remarkable that for a single ad bicycles are mentioned in the annotation.

Of course there are costs to everything - with its lengthy detailed annotations in seven languages, there are only somewhere just over 8,000 items in the World Digital Library. Few have anything to do with cycling history. But what there is can it seems be found.
Posted by michael neubert at 8:50 AM