When I started this blog, my main interest was in acquiring some firsthand experience using Blogger and Flickr to present interesting (hopefully) historical information I would find related to cycling in the 1890s in online digitized collections at the Library of Congress and similar institutions, sometimes making comparisons to present day cycling. As it has worked out, I have sometimes blogged about present day cycling with no reference to historical aspects of cycling and have also blogged about periods other than the 1890s. But other than this (and one other) 'meta' blog post that is about blogging (but blogging that is about cycling) my posts are all about cycling, at least. 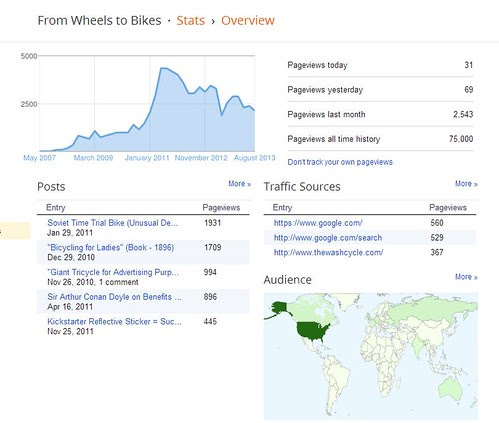 As of this morning, this blog has had 75,000 pageviews (says Blogger)

I don't really understand my traffic over time. My pageview numbers were increasing fairly steadily until early 2011, and then the growth stopped and in fact the numbers fell off quite a bit. On some level of course it doesn't matter - I don't have any advertising. But I was still pleased that more people were looking at the stuff I had assembled. (The numbers were not and have never been influenced for this blog by "referer spam" overall - from time to time one of those sites will appear briefly in my stats, then disappear after a few days. The falloff can't be attributed to that.)

This blog is a little different than most because on a typical day I get most of the traffic from Google searches - that was true at the pageview high point and is true now. People are mostly not visiting because the are regular visitors of this blog but because they did a Google search on "Conan Doyle bicycle" and came to the blog post I did on his statement about the benefits of cycling. (My main contribution is that I extracted from the Scientific American article everything he said and not just the line usually quoted plus I show you the page as published.)

For a while I would try to be clever and come up with blog posts that I thought would be appealing for some other "bike bloggers" who are vastly more popular to link to - as a result, the Washcycle blog appears in my "all time" stats - but the decrease in the traffic can't be (much) attributed to my not doing that any more, either.

I find it hard to believe that the amount of searching for bicycle related topics that brought traffic to this blog has fallen off - my observation would be that the appearance of certain search terms in my "stats" has been remarkably consistent - so I have to wonder if my not taking up the many (insistent, pesky) offers from Blogger to use Google Plus to support my blog has a negative effect in that those bloggers who do use it get a higher page rank in Google search. I suppose I could have been aggressive about trying to connect with people through Google Plus but it seemed pointless for a blog that relies on search.

In the end, I can't know what the reasons are for this. I still blog at least once a week and I still find things to blog about that seem to attract enough pageviews over time to motivate me to keep at it. I still learn about cycling history and about the resources available on the Internet. And I continue to be pleased to see a fair amount of traffic from many other countries.

Cheers.
Posted by michael neubert at 9:20 AM

Email ThisBlogThis!Share to TwitterShare to FacebookShare to Pinterest
Labels: blogging