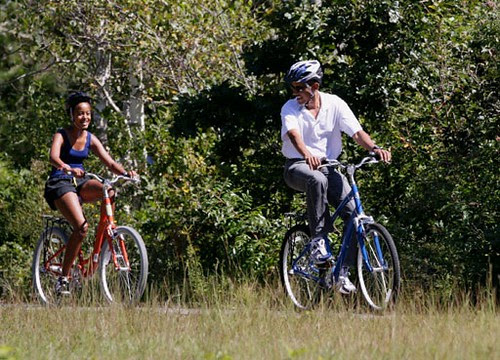 President Obama, riding a bike with family while on vacation

President Obama rides a bike from time to time while on vacation - in that bicycling-as-family-activity (that isn't golf but is vaguely sporty) sort of mode. And that's fine. Not an apparent declaration of "manliness" however. (Also fine.) 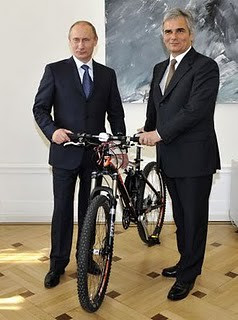 President Putin (while prime minister), presented a bike in Austria

By comparison, sometimes President, sometimes Prime Minister Vladimir Vladimirovich Putin likes to put on shows of manliness. If he isn't leading Siberian cranes while piloting an ultralight he could be tranquilizing Siberian tigers or God knows what. This article in the New York Times gives some highlights of his manly achievements.

In 2010 the prime minister of Austria tried to give (then) Prime Minister Putin an appropriately manly gift and came up with the mountain bike (shown above).

Later, in 2011, Putin and then President Medvedev went for a bike ride together - however unlike most Putin staged events, this was not very manly. Photographs of President (then prime minister) Putin and Prime Minister (then president) Medvedev - their outing on bicycles. The whole thing seems a little forced - really, they needed to go on a bike ride together? Someone at least decided that they shouldn't ride matching bicycles, so Medvedev has a kind of hybrid thing and Putin has a (nominally more manly) mountain bike - although not the one the Austrians gave him. (The Austrians were perhaps sad about this.)

This sort of thing, wearing camo and out in the wild, is more Putin's idea of manliness that one assumes he thinks maps to leadership in the mind of the average Russian. Of course at this point, Putin has kind of spoiled his brand in this area for more intelligent Russians because so much of this sort of thing is obviously staged. In particular, in August of 2011, a scuba dive in which he brought up ancient amphorae was revealed to have been a set up, with the items he "found" having been put there for him in advance.

So when Russians saw that he had caught a huge pike in a YouTube video or on the evening news, many doubtlessly were reminded of the above scene in a classic Soviet film where a fish is put on the line for someone to catch. Is this that manly? (By the way.)

Of course, there are different kinds of leadership - an article appeared recently about Pope Francis: "Avoid fast cars and ride a bike instead pope tells trainee priests"

Pope Francis revealed that it pains him when he sees a nun or priest driving an expensive car, and he praised the beauty of the bicycle, noting his 54-year-old personal secretary, Msgr Alfred Xuereb, gets around on a bike.

People who have nothing better to do than be interviewed on CNN have been worried that he doesn't ride around in a sufficiently tank like vehicle as pope - while in Brazil, a former Secret Service agent in a whiny tone explained that the Pope's "handlers" much be crazy to allow the people of Brazil so much close access to him - and that he used a car and not the armored "PopeMobile." (See this item for example.) 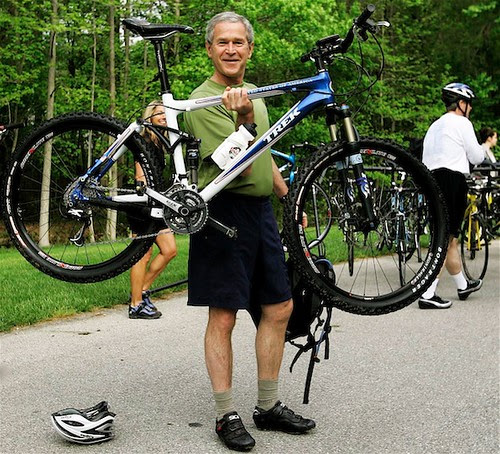 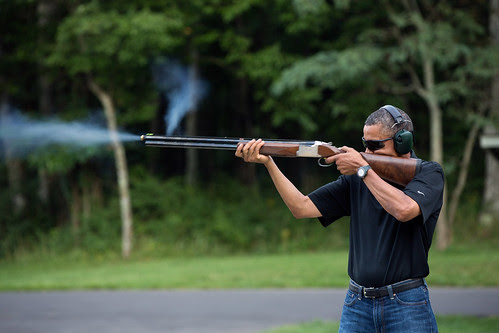 A bicycle would certainly not have solved this problem (whatever it was) for President Obama. Someone found him a gun. Someone else got a camera.

So perhaps there is no connection between leadership and cycling.
Posted by michael neubert at 6:23 PM