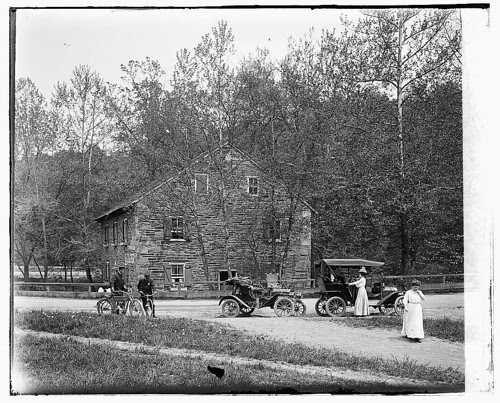 While there quite a few subject headings assigned to this photograph, the person who looked at it was not able to distinguish the motorcycle on the left and the bicycle on the right - early motorcycles were much closer to bicycles in appearance, reflecting their direct evolution from bicycles. Also, it seems clear these are police officers - you can see badges on their jackets and they have the right sort of uniform hats. (See the detail photo below.)

Given where Peirce Mill is in Rock Creek Park in Washington DC, one wonders how it happened that the two officers are together with their different modes of transportation. Are they connected with the women and the cars, and the person just visible in the back of one of the cars?

Peirce Mill has not operated commercially for years but apparently still can be operated for demonstration so in a sense is a working mill - it is used for school programs by the National Park Service and is open for visitors. So, the folks in the photo were on an outing? With policy escort? Another mystery of an old photograph. 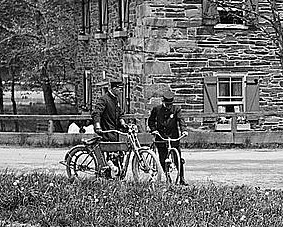 Oddly the Library of Congress has the Mill's name as "Pierce Mill" but the National Park Service web site makes clear it is "Peirce Mill" - I will have to suggest that it be corrected in the LoC database.
Posted by michael neubert at 8:47 PM