I found the poster in the Library of Congress Prints & Photographs Online Catalog - The Prudent buyer selects the Shirk, the latest, neatest, and lightest bicycle in the world - It cures the blues. It saves the shoes. It brings content and merriment.

The full record for it is here. 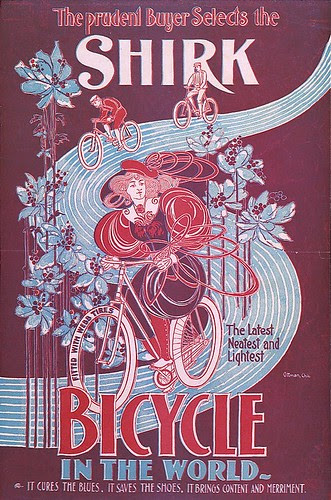 My cropped version of this poster from the Library of Congress

Even though the Library of Congress has determined with reasonable certainty that this item was published in the 1890s and is well out of U.S. Copyright coverage (that is, before 1923) it is still not made available off the LC campus for some reason (other than a thumbnail). However various businesses that publish reproduction posters have had someone visit the Library in person and copy a high resolution file and although I can't make the 4.5 megabyte tiff available here I can at least provide a better image than the tiny thumbnail gif.

The colors as shown in this image are probably not accurate - below is an uncropped version where you can see a color strip but I can't interpret that since I don't have an original one handy to compare to. The main problem here is that this is a scan of a color slide made of the poster and not a scan of the original poster. In other words, a reproduction of a reproduction. It's better than nothing (much better!) but not as good as it could be.

To see if I could find any references to it, I searched The Wheel and Cycling Trade Review volume for 1897 and found passing two mentions of it (in 1,088 pages of text) - one was this somewhat amusing description of a suspicious bicycle sales company, where Shirk appears in a list of bicycle manufacturers of the day available from that dealer.

IN THE CAPITAL OF THE NATION.
The New York Cycle Co., of 434 Ninth, don't seem to care to talk very much about where they get their wheels or about their business methods in general. They offer "unredeemed" bicycles at "one-third" value, but just what they mean is past guessing. Among the cycles noted are Columbias, Syracuse, Pacers, Rambler, Spalding, March, Worlds, Flyers, Niagaras, Shirk, Liberty, Victors, etc., men's, women's and children's wheels. They also exchange or buy outright and take wheels for storage. Their advent has caused some under-surface speculation among the "regulars," and their plans are carefully noted, as this is about the first time, so far, that anything of the kind has been observed here.

At this distance in time (and given the relatively small amount of research I have done) I can't understand who the main target audience for this bicycle company was - the bicycle is described as the "latest and the neatest and the lightest" - would these have been considered particularly good sales values for women, since the poster features a woman rider? Other than "it saves the shoes" it makes no mention of this particular bicycle being a good value, which was often a theme of bicycle ads at this time. A puzzle. 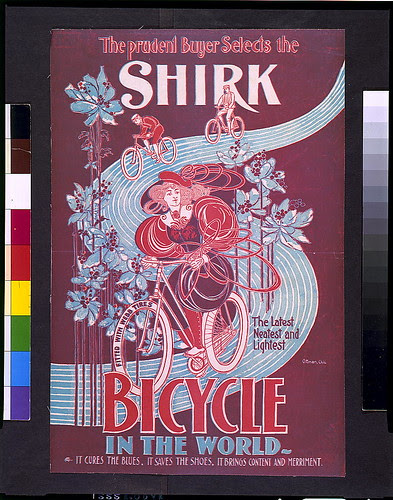 Version as presented uncropped by the Library of Congress


Posted by michael neubert at 9:34 AM