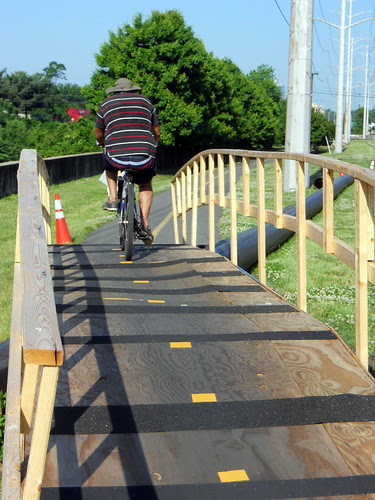 The problem as of June 1 2013 - 100s of pounds of cyclists pounding these plywood sheets, day after day

About 1 3/4 miles from my house, along Four Mile Run on the bike (or mixed use) trail, Arlington County installed a temporary (one hopes) bypass storm drain pipe across the trail during the first week of May (2013). They built a ramp (or bridge) over this so that the trail is still usable. It is built out of plywood and the construction techniques leave something to be desired now that it is clear that it is going to be up for longer than say a week. The construction, not great in the first place, is gradually failing. Lawsuit alert!

The original execution had plain sheets of unpainted or treated plywood such that when it rained they were a bit slick. It struck me as obvious that the boards should be painted or treated with something and at that time throw some sand into the mix to add some traction. So I contacted this County with this brilliant observation:

Comments : On the bike trail along s glebe rd about 1/4 mile s of I-395 there is a new temporary plywood ramp over a pipe. This ramp is getting tire residue and is plain wood. When wet it is slick for bicycles. Can't you paint it and throw some sand on the paint for safety?

The County is fairly responsive. I was slightly amused by the notion that "exterior surfaces are slippery when wet" as being something they couldn't address but whatever.

Thank you for writing about the ramp on the Four Mile Run Trail at South Glebe Road. Most exterior surfaces will be slippery when wet, but I will forward your observation to the unit who is working with the contractor. They may have a surfacing material with more traction for the ramp.

I was surprised (and I suppose pleased) to get a follow-up message soon after.

Again, thank you for notifying trails of the condition of the bike trail ramp during the rain. The contractor has placed non-skid mats on the ramp to increase friction when bikes ride over it. Please see the attached picture for your reference. If you have any additional concerns in regards to the temporary bike ramp on S Glebe Rd, please do not hesitate to contact me. 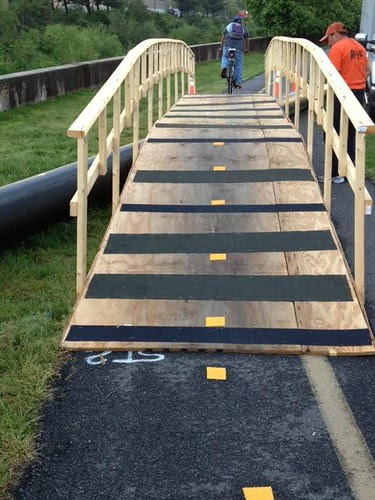 This is a case of what happens when one (in this case me) is not very clear. I don't really see how strips like this solve the overall problem since there is plenty of area that is not covered by the traction material. And it doesn't address what is turning out to be more of a problem, which is that the untreated/unpainted boards are suffering under a higher level of pounding/usage than the County or this contractor imagined. I would not have guessed that a temporary structure of this quality was intended to serve this long - and apparently longer. Who knows how long. 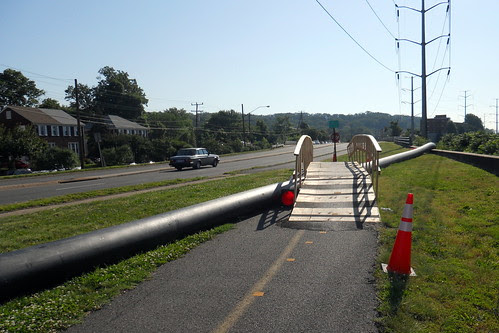 June 1 - looks OK at this distance, although one railing clearly bowing in 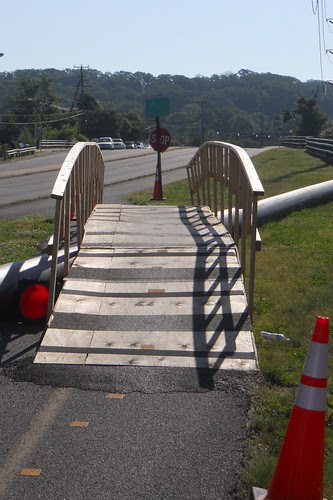 The contractor chose to run the plywood longwise but it wasn't wide enough to cover the entire deck, so they have two sheets of plywood, one larger and one smaller, running side by side. Amazingly dumb. It would have been much better to run the plywood sideways so there is no "seam" running the same direction as the direction of travel. 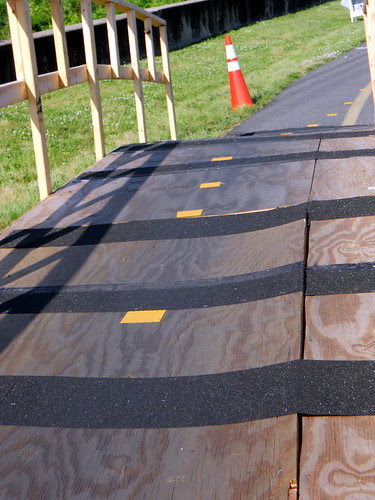 Looking in other direction, clear that main sheet of plywood coming up

In the first picture in this blog post, another problem is clear, if you think about it. Cyclists are mostly are not used to riding on ramps like this and it isn't that wide - so they pretty much want to be in the middle (notwithstanding the little yellow striping that suggests this is some sort of miniature divided highway). Because many cyclists are apparently not used to be presented with problems of this sort, they try to cross in both directions at the same time as other cyclists or as pedestrians even though common sense would suggest that it is a bit risky. The County supplied signage warns as you approach in one direction "bump" (???) and "slow" (that's OK, I guess) in the other.

I will send the County a link to this blog post and perhaps they will make it better.