The State of Cycling in Russia, June 1897

From The Wheel and Cycling Trade Review - an extended overview of cycling in Russia, primarily with an eye to business opportunities selling American bicycles in Russia. What is the market? Who is riding? Why? And so on. The list of regulations governing cycling in Russia are, to say the least, daunting. The Czar's empire took second to no country in this area.

I have reproduced the text of the entire article here as well as including an image of part of the article as it appeared in the original publication (on rather brown paper ~).


In the Land of the Czar

Washington, D. C, June 11, 1897. Consul-General Karel, at St. Petersburg, has transmitted a special report to the State Department concerning cycling in Russia. Mr. Karel prefaces his report by saying that as so many inquiries have reached his office concerning the state of the bicycle trade in Russia he thought that a report to the department on the subject would not be inappropriate.

Of course, on account of the severe climate, bicycles can be used only in the summer.

Very little riding is done until after May 1st. Before any person is permitted to ride he must first pass an examination before some cycling association, of recognised standing and secure a certificate of proficiency. When this is obtained the applicant must present himself before the proper city authority, and by exhibiting his certificate will receive a permit to ride. The permit is issued without any charge, but all riders must pay a certain amount in revenue stamps and must provide themselves with a book of rules and regulations, which is sold by the city and costs about $1.13. The permit is good for one year and dates from May 1st.

Upon the payment of another fee a registered number for the bicycle is issued. This number is in plain white figures on a red plate and must be fastened to the machine both on the front and on the back, so as to be clearly visible to the police and public in case any mishap occurs or there is any breach of the regulations. 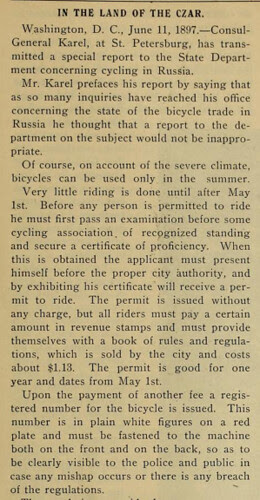 The regulations provide that:

1. Only "low" wheels, or safeties, shall be ridden, and that each rider shall always carry his permit guaranteeing proficiency. Before the permit is issued the rider must file with the City Governor a photograph of himself, to be used in cases of trouble.

2. Every bicycle must be furnished with a bell and at night with a light, and the numbers spoken of must be in sight; that on the front, so as to be seen from either side of the wheel and that on the back, from the rear or the front.

3. Every rider must carry with him at all times, and must show to the police when required, his book of regulations.

6. All riders meeting pedestrians, vehicles, or other riders must keep to the right.

6. When passing pedestrians or vehicles going in the same direction riders must keep to the left.

7. When approaching corners or when near pedestrians riders must ring their bells, but bells must not be rung needlessly.

8. If horses take fright riders must get off their wheels and lead them, and when in crowds must do the same.

9. Wheelmen may not ride abreast, and where there is a party of them there must be at least fourteen feet of space between the riders.

10. Riders must not ride or lead their wheels on the sidewalk,

11. Riding in bicycle costume without a coat is prohibited.

12. Riding on certain streets named by the City Governor is not permitted.

13. Any violation of any of these regulations causes the rider to forfeit his permitand it cannot be renewed for another year.

Previous to February 1st, 1897, women were prohibited from using the wheel, but now the restriction has been removed. There are in St. Petersburg four bicycle clubs and in the suburbs three more. In all there are about 7,000 cyclists in the Capital.

Wheels are imported in large numbers, principally from Germany, England and the United States, the proportion being in the order named.

There are five factories in Russia which manufacture bicycles, two being in St. Petersburg, one in Moscow, one in Warsaw, and one in Riga. There are a number of smaller concerns hardly large enough to be called factories where wheel parts after being imported are assembled.

Two of the factories spoken of are English, that at Warsaw being the establishment of the Singer Cycle Co:, and that at Moscow of the Humber Works. 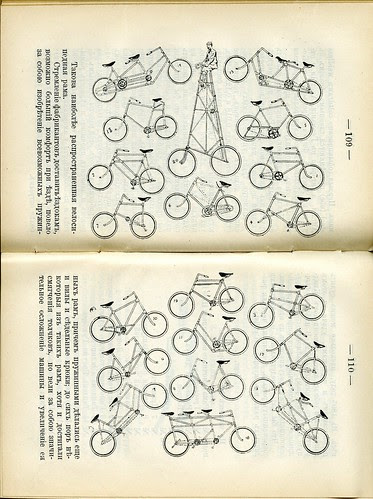 Examples of bicycles in an 1895 Russian book

Another earlier 1895 American look at Russian cycling.
Posted by michael neubert at 8:22 AM