An article describing the (claimed) only seven seat bicycle of the day in Referee & Cycle Trade issue of April 23, 1896. At the time three and four seat bicycles were general used to "pace" riders who would draft behind to set certain categories of bicycle speed records and in certain races - to have a seven seat version would likely not be faster, so this is something of a publicity stunt, I think.


THE ONLY "SEPT."
- - -
Sharpless & Watts Are Its Makers, and It Is a Marvel of Constructive Ingenuity.
- - -
Philadelphia, April 21.—There is now on exhibition at the extensive bicycle factory of Sharpless & Watts, at 1520-22 Sansom street, that Goliath among bicycles—an account of the building of which appeared in these columns some weeks ago—the only septuplet in the world. The frame is practically seven ordinary single diamonds firmly joined together, with all the joints securely brazed, forming a sort of truss bridge between the contact points of the front and rear tires—a wheel base of 16 feet. This will give some idea as to the length of the monster.

It is constructed throughout of l 1/4-inch tubing, and, although no special fittings were required in its construction, David Watts, a member of the firm, is authority for the statement that the toy is worth a "cool thousand." As must be imagined, the strain on the front forks will be immense, but Mr. Watts has provided for this by constructing them of inch tubing, into which 7/8-inch tool steel is driven, insuring the necessary rigidity. This feature of providing additional strength at points of greatest strain is a peculiarity of the entire construction.

An innovation in a strengthening way, which is necessitated by the extreme length of the structure and the immense load it will be called upon to bear, is the introduction of long arches of angle steel, extending on either side of the frame from the front to the rear diamond; at every point of contact these angle steels are firmly brazed. This is also an idea of Mr. Watts', and insures a rigidity which he says is noticeably lacking in pacemaking machines of a similar character.

To assist the front man to steer—for it is a single steerer—an ingenious device of springs on either side of the front handlebar has been utilized which will take much of the strain off him to whom is entrusted that important function.


Back to the last man the tread is 5 1/2 inches; beyond that point to the rear sprocket it is a half inch more. The whee's are 30 inches in diameter, and the spokes are a little less than an eighth of an inch in thickness and fastened to barrel hubs measuring 2 1/2 inches in diameter in the center. With forty teeth in the large sprocket and ten in the rear the gear is 120 inches. The chains throughout are the best Perry Humber 1/4 inch. The 2 1/2-inch tires, which were specially made by Morgan & Wright, are a half-inch in thickness. The weight of the machine, "all on," is in the neighborhood of 175 pounds.

Mr. Watts, on being questioned as to his idea in building the mammoth -wheel, said, in substance: "We built the 'sept' merely to announce to the cycling world at home and abroad that right here in Philadelphia there is a plant which has facilities for constructing wheels of any pattern or dimensions. Of course, we intend to exhibit, it, and it will no doubt prove a good advertisement in its way. Do I think it can be safely managed at high speed on the track? I most certainly do—provided the track is a properly constructed one; and if we can get seven good men on it, and a track that isn't too small and is properly banked, the records will have to come our way. No; we don't intend to race the Atlantic City 78-mile-an-hour express, although I haven't the slightest doubt that we could hold our own against that world-beater for a short distance. I hope to see our pet on the track before long, when the local public will have an opportunity of sizing it up."

There are modern seven-seat bicycles, but the best known (see below) is a novelty item - in a number of cities you can rent one for your company or organization to use for "team building" exercises, for example. 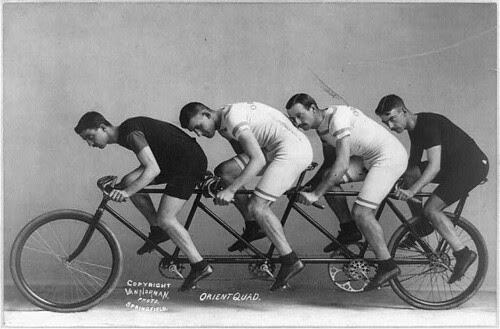 A more typical multiseat bicycle of this period used to "pace" racers
Posted by michael neubert at 9:16 AM

Email ThisBlogThis!Share to TwitterShare to FacebookShare to Pinterest
Labels: 1896, history