From The Referee and Cycle Trade Journal issue for March 26, 1896.

RUSSIA'S FUTURE CHAMPION - Peter Akmatow-Dombrowski and His Many Brilliant Performances.

Peter Akmatow-Dombrowski, the subject of this sketch, will, it is safe to predict, play a leading role on Russian race tracks the coming season; in fact, there is little doubt that he is the best man on the track in Russia to day. He is a native of Kiew and twenty-one years of age. Although active at racing since his fifteenth year, he was not prominent until 1895, when at Moscow he came within a fraction of an inch of winning the Russian mile championship from Djakow. 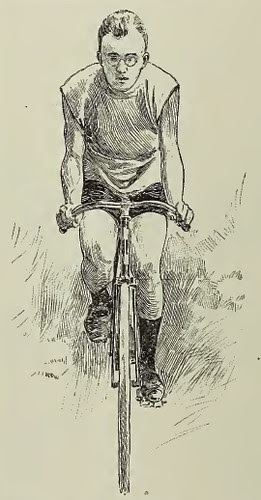 This being the first time he had met the faster men of his country, his performance caused intense surprise. All previous minor events in which he started were won by him, this being his first defeat. He holds the Eussian unpaced records for the quarter, eighth, and half verst, and the quarter English mile.

Coverage of foreign cyclists and particularly outside of western Europe at this time was quite unusual.
Posted by michael neubert at 8:48 PM