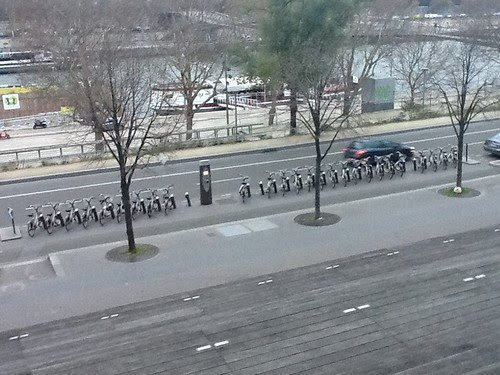 Velibe station, looking down stairs that form the side of the BnF

This is where I drop off my Velibe bike in the morning and pick one up when the workshops are over at the end of the day. So far there are always bikes there. In the morning sometimes the slots are all full! Then there is another station just a few hundred yards (meters) down the same road so I can go down there and it seems to be much less popular so there are more empty slots to drop off a bike.

The Velibe station is between the roadway and a dedicated bike lane that runs left to right (in this image). There is a no bike lane in the opposite direction although there is a lane for cars in that direction, which seems odd to me. Two car lanes and a bike lane in one direction and only one car lane in the other direction. I have seen some bikes going in that direction on the roadway, but some ride down below closer to the river on a path there. I have noticed this a lot - people choose different ways to go the same direction on their bikes. So far as I can tell, the drivers seem not to expect cyclists to stay off the road just because the cyclist has an alternative route away from the road.

When I check a bike out of the BnF station, I have to look back that no cyclist is coming up the bike lane since you back the bike out of its "docking station."

I now appreciate more a well maintained bicycle. The bike I rode back to the hotel today had a broken spoke or something - the rear wheel was quite out of round. Since these bikes have a coaster brake for the the back wheel, it didn't affect braking but it made the ride a little wonky. Others have had different "issues." None have been so much that I turn the bike in to get another one, though. I do check that a bike has air in the tires first but more than that while it is locked up isn't possible.

Posted by michael neubert at 1:20 PM