I found a script deposited for Copyright in 1896 for a "comedy sketch" about bicycling in American Memory - a married couple's adventures in owning bicycles. 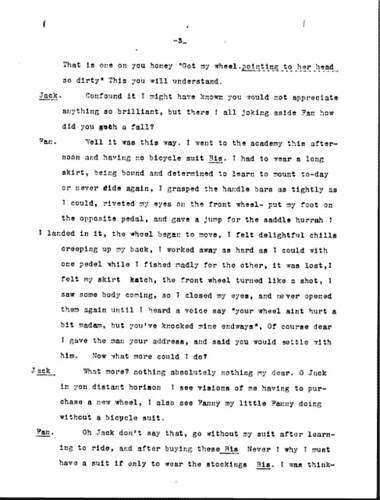 Jack and Fan (short for Fannie) attempt amusing dialog - Jack dirties up the living room pillows while working on his bike while Fan is out learning to "mount" (get on) a bicycle. And while she was out, Jack bought her a new "wheel" for her birthday! Eventually it segues to a discussion of her desire to modify her cycling attire - "not too short," says Jack (not surprisingly).

One could easily read too much into this, but overall this short vignette suggests how bicycling introduced new aspects to social life.

Posted by michael neubert at 8:24 PM