Betsey Jane on wheels; a tale of the bicycle craze. - I found this online recently, digitized for preservation (and access) reasons at the Library of Congress. 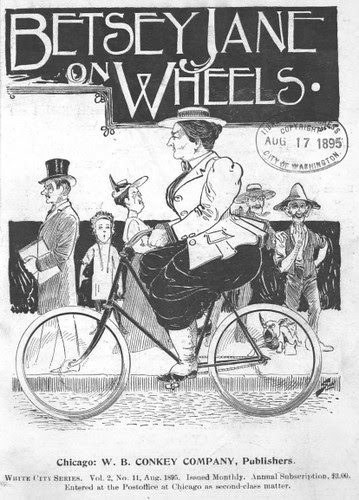 Title page for "Betsey Jane on wheels," published in 1895

PDF of the entire book

Set of many of the illustrations from the book 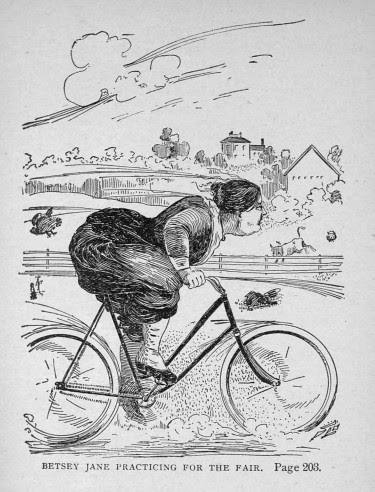 The heroine in her bloomers

This book was apparently part of a subscription series that readers would receive "issues" of as one subscribes to a magazine - but each would be a different book. (Oddly this title was deposited on copyright promptly after publication in 1895 but apparently not cataloged for ten years. Keep in mind that I'm also a librarian, so such things are of mild interest - if only to me.)

This work of fiction, over 200 pages, describes a family and then town's infatuation with bicycles and cycling. It precedes from one son taking it up, to the daughter (who wears risque bloomers), to the father and then finally the title character, the mother of the family, Betsey Jane. Issues such as whether women should ride bicycles (and if so, what they should wear) and the views of churches and government on cycling are dealt with directly (more or less - considering it is a work of fiction). Written in 1895, before the cycling craze hit its peak and was then overcome by the automobile, some of the suggestions about the future of cycling are optimistic or anyway didn't come to pass - are the suggestions about uses of bicycles on farms at all serious? I don't know.

The author steps out of his fictional role (as Betsey) and has the following conclusion, which is editorial in its tone.

As the most interesting part of a book is usually the conclusion I have concluded to finish this work by writing a conclusion, but will leave the reader to form his or her conclu­sion in regard to its merits.

I have attempted to give some idea of the bicycle craze which is now so prevalent, and although some cases may be slightly over­drawn, I think that I am justified in such overdrawing, as the bicycle craze will undoubtedly reach more alarming proportions another season.

The large manufacturers of buggies, wagons and street cars having noticed a decided fall­ing off in the demand for their goods, and, profiting by this experience, have concluded to meet the popular demand by converting their plants in bicycle factories. They have declared their intention to place wheels on the market at less than one-half the present prices, which will bring them within the reach of nearly every­one. When a good wheel can be purchased for twenty-five or thirty dollars, few people will be without one, for as a means of conveyance the cycle eclipses all four-footed beasts, as it is cheaper, safer and faster.

That cycling is a healthy and profitable recreation, none can deny, but, like all other good things, there will be plenty of people who will carry it to the extreme, and many others who will condemn the whole business on account of the injurious use which is made of it by a few.

Cycling is one of the few sports in which ladies can indulge with the same freedom and good results as the more fortunate masculine element of society. There has long been a want of something which will afford the ladies both sport and exercise, but so far nothing has been introduced which equals the cycle. Men can play base ball, run foot races, hunt, fish, box, wrestle and jump, but poor woman has so long been debarred from any active amusement, that, physically, she has been deteriorating, and now the cycle comes in as a good Samaritan. It affords an asylum, a refuge, a sort of fire escape, and gives the gentler sex an oppor­tunity to build up their well nigh lost physical powers.

What if some do abuse the sport and themselves also? It does not follow that cycling is wrong, any more than a great many other institutions which have suffered from the same cause, or that because a few church members do not live up to what they profess, that the church is entirely wrong, yet there are people who will argue on this basis, and tell you that cycling is not right, and that no intelligent or sensible person will ride a wheel. But the world would not be able to move in its accustomed orbit without some cranks, as the millenium would soon arrive and put an end to cycles, cranks and all. 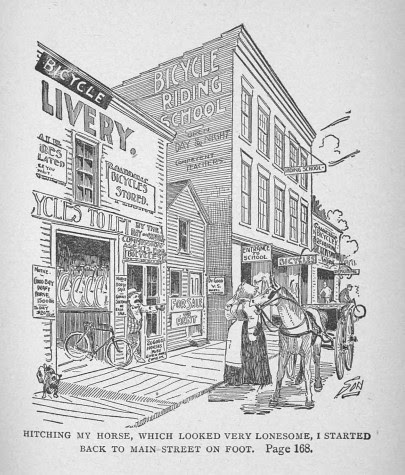 The coming "car craze" had not yet tempered this fanciful view of the future
Posted by michael neubert at 10:05 AM