Belling the Bike (Not the Cat)

With the trails busier, some use bells to indicate they are passing but most don't (where I ride, anyway). I saw someone the other day with "jingle bells" on his handlebars, ringing more or less continuously, although not very noticeably.

I then happened upon this ad from 1898 - for the the Saks [chain] stores, in Washington DC. "Looking towards spring season sales of bicycles and bicycle 'sundries.'" 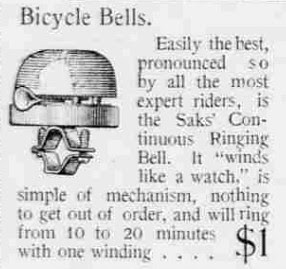 Full ad is here, with many bike accessory prices from 1898 (not just bells)

The "continuously ringing bicycle bell" is apparently not a new idea.


Bicycle Bells. Easily the best, pronounced by all the most expert riders, is the Saks' Continuous Ringing Bell. It "winds like a watch," is simple of mechanism, nothing to get out of order, and will ring from 10 to 20 minutes with one winding .... $1.

A dollar for a bicycle bell is pretty pricey for those times. The ad lists a "single stroke, large size" bell for only 12 cents. More exotic "bell grips, a handy combination of grip and bell" were 25 cents (each - unfortunately no illustration of what these looked like). In general, by 1898 the prices for bicycles had collapsed to a considerable degree - the Spalding price was only $50 for their best bicycle, down from more like 100 dollars a few years earlier.

Posted by michael neubert at 8:38 PM