I found this news item online, in Russian, about a bicycle theft in Ukraine. The following is my edited translation. (I started with the Google version . . . )

According to the correspondent of the Kharkiv Press Service of the Main Department of the Ministry of Internal Affairs of Ukraine (that is, the police) in the Kharkiv region, the incident happened in the village Kochetovka Zachepilovskii area.

That evening the two women were at a party. They eventually tried to go home when the buses were no longer running. They did not have money for a taxi. They decided to "borrow" the money or any transportation from a 72-year-old local resident.

Knowing that the pensioner lived alone, the women boldly opened the gate to his yard and began banging on the windows of the house. They called the man into the yard and asked him to give them money or a bike to ride home. The surprised man opened the gate and tried to drive the drunk women out of the yard, explaining that he did not know them and did not plan to give them anything. Then they pushed the owner, went into the hallway and found the keys to the shed where there was a bicycle, and left. The man called the police - the suspects were arrested for the the crime and spent a few days in jail. The women again came to the pensioner's home and they took metal materials from his yard in order to sell them for scrap. "They have been detained [again] as criminals," - the press service says.

This is now a criminal case under Article 186 (robbery) of the Criminal Code of Ukraine. 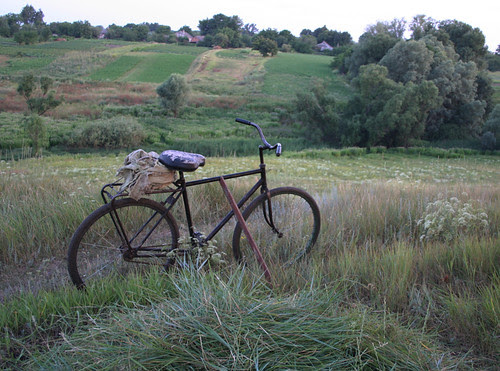 A bicycle in this part of the world

Incidentally, the main factory for sports bicycles in the former Soviet Union was not far away, the Khar'kov Bicycle Factory - here is one of their catalogs.
Posted by michael neubert at 8:41 AM