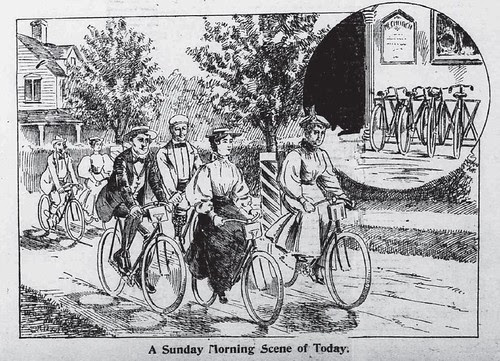 This full page article looked at "the moral, the physical, and the commercial effects" of the "craze." Firsthand opinions of church leaders were gathered and presented as evidence ~

The clergy men whose views on the moral side of wheeling are given below were selected at random, the only object in view being to secure opinions to secure expressions which would represent the various denominations.

Their opinions are practically in accord, and, as will be seen, form a strong verdict in favor of the bicycle for both men and women, Practically the only point of difference among them is the question of Sunday riding.


REV. GEORGE LUCCOCK, D.D., Metropolitan Presbyterian "As I ride a wheel myself, I naturally approve of the invention, of course it can be used to an immoral end, like everything else. It's greatest abuse, to my mind is using it as a means of desecration of the Sabbath, but this in not the fault of the wheel; it is due to the ungodliness of the riders."

In other words, this minister assumes riding bicycles as a Sunday activity is in competition with church attendance but otherwise fine. He doesn't mention the compensating possibility shown in the illustration of cyclists using their wheels to get to church.

REV. I. J. STAFFORD, of St. Patrick's "I have given the bicycle subject no thought. I, therefore, have nothing to say for the present."

REV. THOMAS CHALMERS EASTON, Eastern Presbyterian. "So far as the immodesty of dress is concerned, I believe every gentleman will admit with me that the decollete dress of ladies in the circles of fashion are more suggestive and imprudent than the a la bloomer costume of the wheel."

"I endorse the wheel and regard it as healthful exercise, which can only be made a means to licentiousness where the tendencies are already immoral on the part of its patrons. Unfortunately, I have not a wheel of my own, and no doubt I would be a greater enthusiast for its use if I possessed the 'flying iron steed.'"

A number of the ministers focused on the morality (as they saw it) of women's cycling attire.

REV. W. R. STRICKLEN, pastor Hamline M. E. Church, Ninth and P streets Northwest. "As Washington is the wheelman's paradise, no minister who propose to do his whole duty should be without a bicycle. Mine is as much a facter in my work as my study. By its aid I have gone through a hard season's pastoral work with comfort and delight. I would not part with my faithful companion under any consideration. All hail to the ever increasing army of wheelmen!"

So there you have it - Washington DC, in 1896 a paradise for cyclists!

These are just excerpts from the statements in the full article of ten representatives of different denominations whose opinions were mostly positive - which isn't too surprising since judging by the content of typical articles in the Morning Times at the time it seems to have been trying to attract cycling Washingtonians as readers.
Posted by michael neubert at 8:19 AM