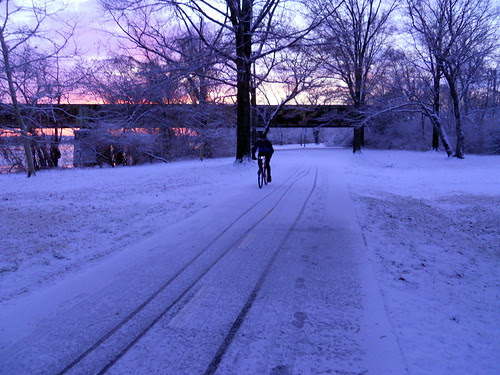 So, Tuesday night it snowed again, setting up a slick commute (so to speak) for Wednesday morning, and a bit beyond as it turned out. In an earlier post I said I didn't see much point in studded bike tires, but I realize now I was thinking mostly of heavy snow conditions like we had last winter (where the problem was pushing through snow and not ice at all).

Tuesday's freezing rain followed by an inch or so of snow set up conditions where bike tires with studs are pretty good to have - and since I have a set, I used them (although I took the picture above of some other rider during my commute - the pictures below are of me + the bike). 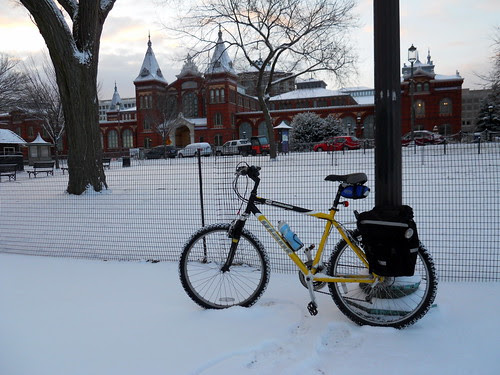 This is an old Giant that belonged to one of my sons - I have an extra set of wheels that I equipped with some not-very-expensive Nashbar-branded Kenda tires that have studs. They work great in icy conditions. In the image below you can see, if you look closely, some of the studs. 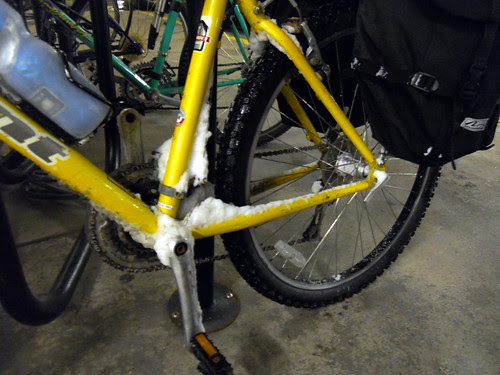 It got up to 38 (F - say +2 C) during the day and it was windy, so much of the snow melted by the time I rode home, but there were enough icy patches that I didn't mind having the studs. Really, it is on icy spots (rather than on snow of any depth) that the studs are amazing - it is possible to proceed at a decent stable pace, say 12-14 mph, and not feel any slipping, although one needs to be sensible - the studs aren't so numerous as to be relied on for quick stops, for example. When traveling on dry clear pavement one can hear them clicking away and I assume getting slowly less pointy (flattened out). If you brake hard on dry pavement you can simply pull individual studs out of the tires.

So Thursday, having decided that mostly the trail was clear, I went back to my cyclocross bike (no studs). I reduced the tire pressure to 50 pounds per square inch but that does zero for grip on ice. Using the cross bike meant lots of speeding up, then slowing down when I had to go over icy areas plus making sure I was paying attention 100 percent of the time so as not to end up on ice at the wrong speed. On the way home on a overpass made of concrete (which thaws much more slowly since the jurisdictions where the bike trails are don't do anything to speed that up), I screwed up and fell, dinging my left shoulder pretty good but not breaking anything. My head hit the left concrete sidewall of the overpass but not too hard and anyway that's what helmets are for, to keep one from getting hurt (and it worked). Nonetheless, OW!

So I'm a little embarrassed, frankly. I could have and I guess should have ridden the "ice bike" with studs one more day in order to avoid this. It would have been 9.5 miles of studs and heavy mountain bike on clear pavement and some 100s of yards on snow and a little slippery, dangerous ice. And I'm pretty sure I would not have fallen ~ hmm. Have to think about this . . . 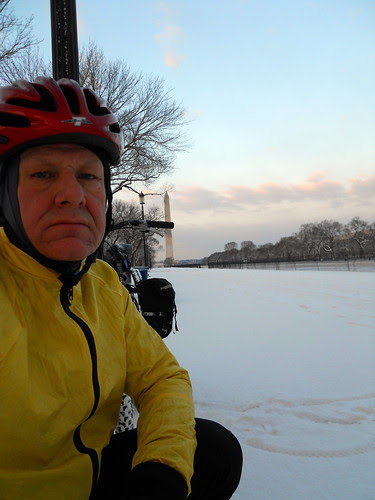 I should have spent one more day on the studded tire bike.
Posted by michael neubert at 12:47 PM