On Thursday (January 6) the weather folks predicted snow possible overnight, continuing into the morning. I decided to wait and see before making a choice of bike to ride - "bad weather" or "good weather" bike.

Friday morning, I looked out - no snow, and I could see stars. Didn't look much like snow. The Washington Post site, however, said "light snow falling in Washington." I decided to ignore and ride in the good bike - the chance of show at that moment was like 20 percent according to weather.com and zero in the afternoon.

On the way in from Arlington to Washington I passed exactly one bike - I guess the weather forcast had put off some people, although Friday's have fewer commuters generally (since a lot of people telework or have compressed work schedules). I could hear the guy's tires as I came up on him from behind - he had studded bike tires! Well, that seemed like overkill to me, since we hadn't even seen a flake. 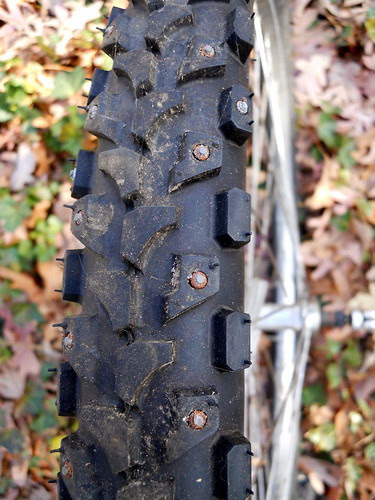 I have a set of mountain bike studded snow tires but I haven't used them much in recent years - in my view, they aren't terribly useful here. I don't think the studs help one go through snow, they only contribute to staying upright on icy surfaces. There just hasn't been enough ice to get me interested in switching my approach from riding a cyclocross bike with 25 mm tires with the inflation dropped to ~50 pounds (the alternative being an old hardtail mountain bike with the much much wider studded tires).

The studded mountain tires I have are Kendas, by the way, but not the model available now, it seems, the "Klondike." As I recall, I only paid like 25 bucks each for them about five years ago from Nashbar. Thought it was a pretty good purchase at the time. . .
Posted by michael neubert at 9:04 AM